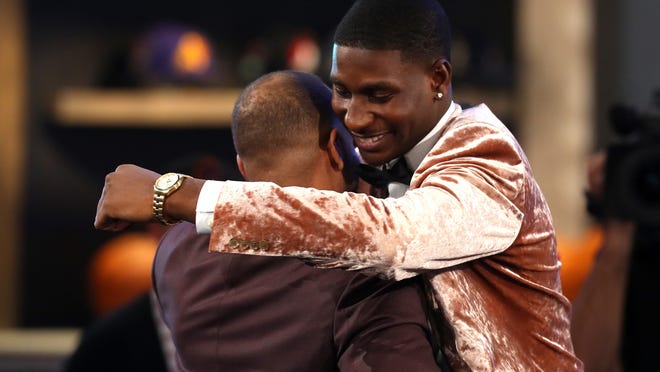 Kendrick Nunn, a shooter in his own right, loves himself some Steph Curry.

Now, the two could end up being teammates, after Nunn, the Oakland University star, signed a partially-guaranteed contract with the two-time defending champion Golden State Warriors following the NBA Draft early Friday morning.

The contract guarantees Nunn a spot with the Warriors' Summer League team as well as their fall camp, and some guaranteed money.

"Steph Curry is one of my favorite players, with how I shoot the 3's," said Nunn, 22, who played one season at Oakland, following three years at Illinois. "They play the game the right way. I'll be fortunate to be around those guys, all those All-Stars."

Nunn participated in several pre-draft workouts, but the last was with the Warriors, this past Saturday. During the visit, he met with the entire front office.

They called him shortly after the second and final round of the NBA Draft ended, and Nunn said, "They are fully invested in my development."

He becomes the third Oakland player in the last seven years to join an NBA organization, after Kay Felder (2016, 54th pick by the Cleveland Cavaliers) and Keith Benson (2011, 48th pick by the Atlanta Hawks). Felder has bounced from the Cavaliers to the Chicago Bulls to the Detroit Pistons, with whom he remains.

"Oakland prepared me very well. That year was a blessing for me. I put my head down and worked," said Nunn, who was one of five finalists for the Jerry West Shooting Guard of the Year award. "I was fortunate enough to have a coach (Greg Kampe) who believed in me and my abilities, and I displayed that on the court.

"Oakland was a blessing. I love Oakland."

Ironically, Nunn goes from Oakland U to the city where so many around the country assume the college is located, Oakland, Calif.

Nunn arrived at Oakland after a tumultuous career at Illinois — a career that ended amid an allegation of domestic abuse. Kampe said he vetted the details of the case thoroughly and came away convinced Nunn deserved a second chance.