Steve Waterfield, 46, was hired earlier this month to replace Jeff Konya. He comes from the University of Nebraska. 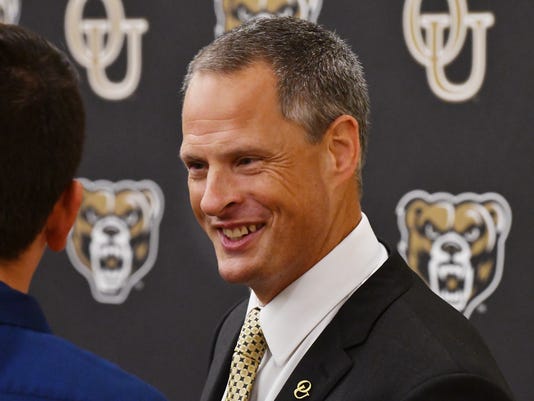 Oakland University reached deep into its coffers to find a bit more cash for the new athletic director, Steve Waterfield.

Waterfield, hired from the University of Nebraska earlier this month, will earn $237,000 annually under a three-year contract, according to contract details obtained by The News through a Freedom of Information Act request.

Waterfield's predecessor, Jeff Konya, earned about $210,000 a year under a five-year contract he signed last June before taking the athletic-director job at Boston-based Northeastern in January.

Waterfield, 46, earned $222,250 at his last job, as executive associate athletic director at Nebraska. He previously has worked at Miami (Fla.), the University of Wisconsin and Ohio State, after a stint as an assistant attorney general in Ohio. He holds a law degree and two master's from Ohio State, and a bachelor's from Kenyon College in Ohio.

Like Konya's last contract, there is no bonus structure in Waterfield's deal. That's a stark contrast to contracts signed by other new athletic directors such as Bill Beekman (Michigan State), Michael Alford (Central Michigan) and Scott Wetherbee (Eastern Michigan), who can earn thousands in annual bonuses. Beekman's base salary is $750,000, Alford's is $275,000 and Wetherbee's is $269,000.

Waterfield does receive a $750-per-month stipend for an automobile.

Steve Waterfield comes to Oakland from the University of Nebraska. The Detroit News

There is no buyout on Waterfield's contract, though he can't discuss employment with other NCAA institutions without first notifying Oakland University officials. If he's fired without cause, he's eligible for severance; with cause, he's not.

Waterfield's first day on the job is Aug. 9, and he faces several challenges overseeing a budget of between $13 million and $15 million, and a department staff of 70. Among them, whether to bring men's and women's hockey to the university, as well as facility issues, specifically a basketball practice facility and upgrades for softball and baseball. His background is in marketing and branding, as was Konya's. Fundraising will be among his chief priorities.

Waterfield was one of three finalists for the athletic-director job. The others were an official from Ohio State and a sitting athletic director from the south.