The father of Jordan McNair called for the firing of head football coach DJ Durkin on Thursday. 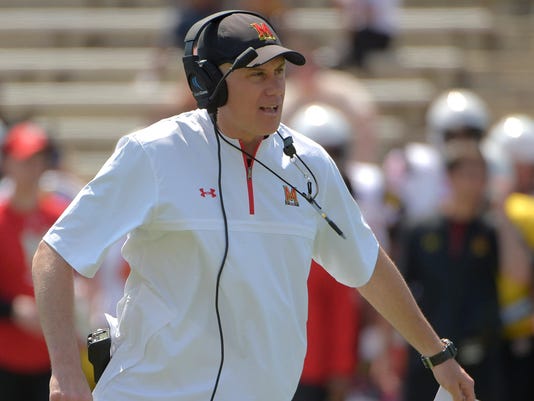 The father of Jordan McNair, the 19-year-old Maryland football player who died of heatstroke weeks after collapsing at practice in May, called for the firing of head football coach DJ Durkin on Thursday.

In an interview with Michael Strahan on ABC’s “Good Morning America,” Martin McNair said the coach, an ex-Michigan assistant who is on administrative leave along with three other staff members pending a review of the team’s culture, should not return to the sidelines.

“He shouldn’t be able to work with anybody else’s kid,” he said. “Of course, he should be fired.”

The 19-year-old died in June, 15 days after he had trouble finishing a conditioning test that consisted of 10 110-yard sprints.

University of Maryland President Wallace D. Loh and athletic director Damon Evans met with McNair’s parents to apologize and take “legal and moral responsibility” for the circumstances leading to his death, Loh said this week.

During the “Good Morning America” interview, McNair’s mother, Tonya Wilson, said if the program has the “toxic culture” that has been referenced in ESPN reports, she is sure her son would have pushed himself as hard as he could to make sure he fit in — even to his detriment.

Hassan Murphy, an attorney for the family, said he had “no doubt” that such a culture existed on the practice field. “It’s what led them to push Jordan beyond what his body was able to tolerate,” Murphy said.

Martin McNair said he was surprised when he got the initial call telling him his son had experienced a seizure, because he had no history of them.

According to 911 tapes obtained by The Baltimore Sun, a first responder reported to dispatchers that McNair was “unable to control his breath” and had had a seizure.

His father said he hadn’t been in the hospital since he was born.

“Here was a kid that was healthy for 19 years,” Martin McNair said. “He worked hard every day at all games, never missed a game, never missed a practice. Initially, it was hard to wrap our minds around the severity of a heat stroke.”

McNair’s parents asked other families to visit the website of their newfound Jordan McNair Foundation, which advocates health and safety for players, to prevent future deaths.

Wilson told Strahan that the family was holding up “as best we can.”

Martin McNair’s father said parents teach their children that hard work will lead to success, and that he and Wilson sent their son to the university and its football staff, trusting they would “keep him safe.”

“They did anything but,” he said.

Durkin, 40, was Michigan’s defensive coordinator before being named Maryland head coach after the 2015 season.

All 19 commitments for Ohio State’s class of 2019 and all six for 2020 are sticking with their pledges, for now, according to the Columbus Dispatch. That includes Oak Park quarterback Dwan Mathis.

Coach Urban Meyer was put on paid leave Aug. 1 — two days before preseason practice opened — while the university investigates his handling of domestic abuse allegations against fired assistant coach Zach Smith. Ohio State officials say they hope to finish up the probe within the week.