Herbstreit: With Patterson, Michigan will beat Notre Dame, 'get on a roll'

ESPN college football analyst Kirk Herbstreit believes Michigan, with the addition of quarterback Shea Patterson, should be a major factor in the national picture this season.

Herbstreit: With Patterson, Michigan will beat Notre Dame, 'get on a roll'

Shea Patterson says he is grateful to be on the Michigan team. The Detroit News 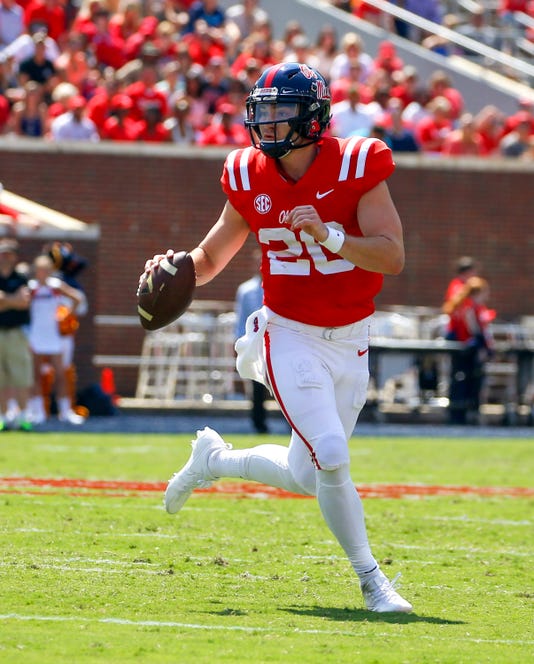 ESPN college football analyst Kirk Herbstreit believes Michigan, with the addition of quarterback Shea Patterson, should be a major factor in the national picture this season.

Herbstreit will call three games the first weekend of college football next week, in addition to working the season premiere of College GameDay Sept. 1 at South Bend, where Michigan opens at Notre Dame. He was interviewed Friday during an ESPN conference call.

“I’m high on Michigan,” Herbstreit said. “If they can beat Notre Dame in South Bend to kind of get their confidence up after an 8-5 year, that will be important before they go on the road. They’ve got to go to East Lansing, you have Penn State at home and of course at the end, in Columbus. They’ve got a tough path to get there, but I think it’s going to be a much, much better team than it was a year ago because of the offense.”

Just how high on Michigan is he as the Wolverines enter their fourth season under coach Jim Harbaugh?

“And then it’s just a matter of whether or not – again, you’re playing Wisconsin at home, you’re at Michigan State, Penn State at home and you’re at Ohio State, just to name a few, besides the Notre Dame game. Those games are tough for anybody to deal with and to sit here and predict they’re going to win the Big Ten ... I think they’re going to be right in the middle of toughest division in the country, that’s the Big Ten East, and it’s just a matter of whether or not they can catch a break and win a couple of those games.”

Harbaugh has kept the team under wraps during preseason camp, although offensive players have said there have been “tweaks” to the offense, presumably to take advantage of Patterson’s legs and arms. Patterson transferred to Michigan last December from Ole Miss, and Harbaugh named him the starter on Monday, breaking from his tradition of not publicly announcing a quarterback until kickoff of the first game.

“Somebody asked me the other day a team that could come out of the Top 10 and get into the playoff, and the team I gave them was Michigan,” Herbstreit said. “I think they’re a team that’s going to be knocking on the door whether or not they catch the breaks and win those games. I think they’re going to be a much better team than they were a year ago because they’re going to take care of the ball better with better quarterback play out of Shea Patterson.”

While some consider this a pivotal year for Harbaugh, who made substantial staff changes after last season’s 8-5 record, Herbstreit thinks those conversations are ridiculous. 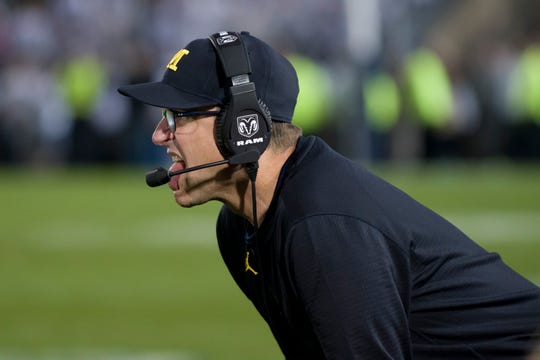 “I’ve been interviewed a number of times already this summer about what’s at stake for Jim Harbaugh or what kind of year does he need to have and, personally, I just don’t see it,” he said. “I might not have a good feel for it, but I still think he’s one of the elite coaches in the game.

“Let’s face it, they turned the ball over (last season). They just have not had great quarterback play, and when you turn the ball over you’re just not going to win the big games. They were minus-4 on turnover margin for the year. You go back and look at the crucial games where they lost, think about how many times turnovers cost them football games.”

Eliminating those turnovers, obviously, is key, especially with Don Brown’s defense, which was ranked No. 1 nationally in 2016 and No. 3 last season.

"If I were Shea Patterson, and I was a huge fan of Shea when he was at Ole Miss, just taking care of the ball … forget about playmaking ability, just win the turnover margin,: Herbstreit said. "If he just does that and they’re able to punt and rely on the defense and win field position, if I were Shea, I wouldn’t feel like I’ve got to do heroic things here, because he doesn’t.

“With (receiver Tarik) Black back from the injury, they’ve got a great group of receivers. They’ve got a couple veteran backs in (Chris) Evans and (Karan) Higdon. They’ve got a big offensive line. Just don’t turn the ball over.”

Patterson, however, can be a playmaker the Wolverines have lacked. He can extend plays. He can be more than a game manager.

“(Patterson’s) kind of a dual guy,” Herbstreit said. “I want to see how Jim and Pep (Hamilton) use him in more of their pro-style offense, how they take advantage of his legs and mobility.  Because, yeah, he can sit in the pocket and he can read and make throws, but he can also be a real threat if you get him out on the perimeter and give him a chance with that run-throw option.

“We have not seen a ton of that, obviously, from Michigan since Jim’s been there. Of course, he’s keeping everything very guarded, but I can’t wait to see how they play with Shea because he does have that in his background.”