Davis was hired in June, following an exhaustive search after the firing of Bacari Alexander, who spent two years on the job and was 16-47. 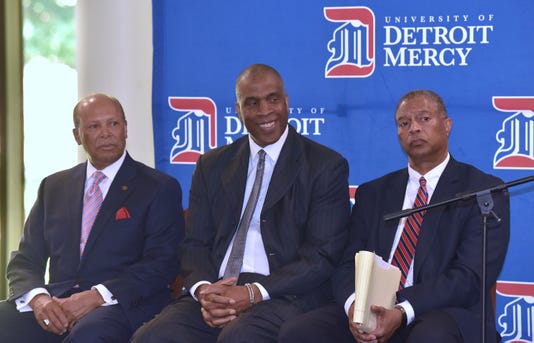 If you're looking for some familiar faces on the Detroit Mercy men's basketball roster, you're going to have to squint really hard.

Davis this week also officially finalized his coaching staff, which includes his son, Mike Davis Jr.; Tracy Dildy, who recently was head coach at Chicago State; and Keith LeGree, who, like Davis Jr., was on Davis Sr.'s staff at Texas Southern.

Davis Jr. and Dildy have been on campus and working for several weeks. LeGree was the final addition. Former NBA player Rod Strickland, recently an assistant at South Florida, was Davis' first choice to round out the staff, but a deal never was finalized.

Davis, 58, was hired in June, following an exhaustive search after the firing of Bacari Alexander, who spent two years on the job and was 16-47.

"We have some good players who want to work," Davis said in a statement. "I am excited to get these guys together on the court and to see their overall effort. I am looking forward to working with everybody and seeing how quickly we can get everyone to understand the effort it is going to take to become a good basketball team."

►Chris Davis has joined Central Michigan's men's basketball staff, after one season on staff at Air Force. The previous year, he was video coordinator at CMU. Davis, a Jackson native who also worked on head coach Keno Davis' (no relation) staff at Drake and Providence, replaces Kevin Gamble, who left to be a scout for the NBA's Toronto Raptors.

►Michigan State hockey will be on TV at least 13 times this season, and Michigan at least 12, according to releases by Fox Sports Detroit and Big Ten Network his week. The Michigan State-Michigan game Saturday, Feb. 9, at Little Caesars Arena will be on FSD, as will Dec. 31 Great Lakes Invitational championship game, which could feature Michigan, Michigan State or both.

►Fun fact: This year marks the 80th anniversary of Michigan football's famous winged helmets, created in 1938 by legendary coach Fritz Crisler in an effort to make his team's receivers recognizable downfield. The design's history has been chronicled in the coffee-table book, "Wings," of which a third edition was recently released.

►Detroit Mercy women's lacrosse has a new head coach, Megan Callahan, who was an assistant the past two seasons. She played for Detroit Mercy from 2010-13, then began her coaching career at West Bloomfield High School.

►Former Western Michigan left-handed pitcher Keegan Akin was named the Eastern League’s pitcher of the year, for the Double-A Bowie Baysox, a Baltimore Orioles affiliate. The 54th overall pick in 2016, Akin was 14-7 with 142 strikeouts and a 3.27 ERA in 25 starts this season.