When Nigerian-born Babatunde Sowunmi first picked up a basketball just a few years ago, becoming a Division 1 basketball player was on no one’s radar. 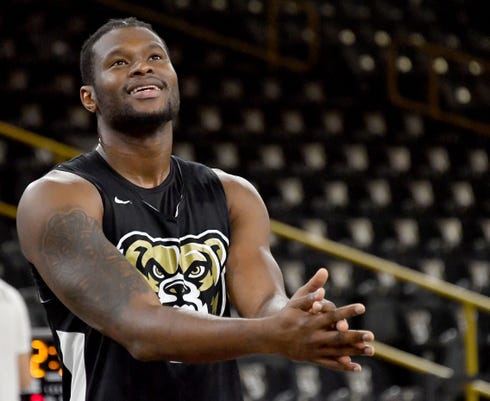 Rochester — Babatunde Sowunmi is easy to spot in the gym.

At 6-foot-11 and 260 pounds, the Oakland University freshman center makes most of his teammates look small in comparison.

What’s not as obvious is that when he first picked up a basketball just a few years ago, becoming a Division 1 basketball player was on no one’s radar.

“I didn’t know how to play,” Sowunmi said at Oakland’s media day on Wednesday. “All I could do was raise my hand up, block shots and get rebounds. So it took a long time to know how to dribble and make shots. It was a process.”

After being born and raised in Nigeria, Sowunmi was offered an academic scholarship to Solid Rock Academy in Fayetteville, Georgia. He left his family behind at the age of 15 and crossed the Atlantic Ocean with soccer being the only sport he had ever played.

When Sowunmi arrived in the United States, he started playing football simply because it was the fall. He became an all-region kicker and defensive end, averaging five sacks per game, but when winter came around, his interest turned to basketball.

“Because of my height I liked basketball, too, because I could block a lot of shots,” Sowunmi said. “I thought, I’ll try this, too.”

Sowunmi became a three-year starter, averaging 17 rebounds per game and leading his team to a regional runner-up finish as a junior.

Still, Sowunmi didn’t know he was Division 1-worthy until a memorable performance at an AAU tournament in Milwaukee where he shut down a top-ranked player and caught the eye of Oakland assistant coach Tony Jones. When Sowunmi got his scholarship offer from Oakland the summer before his senior year, he knew basketball could be a big part of his future.

“He’s a really good kid who’s never played this game,” coach Greg Kampe said. “He just started playing it a couple years ago. It’s refreshing to see a young man improve so much. He’s a long way away, but if you would have seen him when he got here versus where he is today, you’d be amazed at the progress he’s making.”

Sowunmi’s main focus remains academics. He was academically ranked in the top of his class the past two years and served as class president. He wants to be a human resource developer or sports agent if pro ball isn’t an option.

Kampe says Sowunmi still has a lot to learn. For example, he didn’t know where the “elbow” was on the basketball court when he arrived at Oakland six months ago. But his timing on rebounds and strength could get him early playing time, especially after the unexpected transfer of rim-protector Isaiah Brock. Sowunmi has rapidly gained basketball instincts, and he’s already put on 15 pounds of muscle since getting on campus.

“I go up there with the mindset that this is my ball,” Sowunmi said. “I have to get it. That’s how I play.”

The biggest challenge this season may come from Mother Nature.

Sowunmi thinks the food and cold weather are the biggest differences between Nigeria and the U.S. And he has only experienced Georgia winters.

“It was a little bit cold, and I could cope with it (in Georgia),” Sowunmi said. “But coming here? Oh my God. I’m already getting ready for winter.”

“Back in Atlanta, we went to this place called Six Flags,” Sowunmi said. “Oh my God, I freaked out. So I said, ‘Oh, this is not for me.’ And coming here, too, on the plane, I was nervous and sweating.”

Plane rides are something Sowunmi will have to get used to. Oakland has no home games in December, playing in Ohio, Connecticut, Massachusetts and Georgia.

Oakland could use a presence down low, especially on the road, but Sowunmi knows he won’t be able to step right into the starting lineup.

“The pace, everything is so much faster than high school,” Sowunmi said about the challenges of adapting to the college game. “Everybody’s strong, just like me, some even stronger than me.”

Regardless, Sowunmi has enjoyed his experience so far.