Antoine Davis' rang up his sixth 20-point game, posting 24 against Eastern Michigan Saturday, in a 78-74 victory. 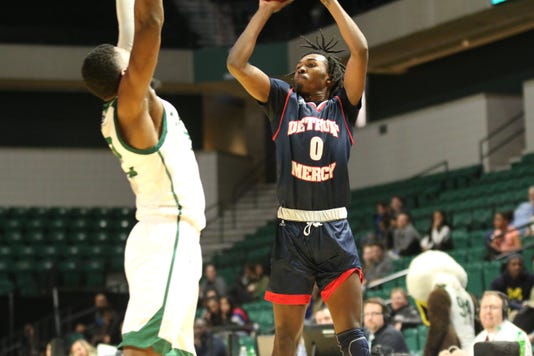 Davis now has six 20-point games in his six-game collegiate career and entered the game averaging 31.2 points per game. He matched Paris Bass’ record of six-straight 20-point games to start his career. He has four 30-plus performances and scored 42 in the win over Loyola Maryland.

Ty Groce hit two free throws with 1:15 left go get Eastern Michigan within two, 71-69, but Cole Long knocked down a 3 and Lamar Hamrick dunked to push the lead to 76-69 and Davis capped his performance with two free throws.

Davis hit 8 of 23 from the floor, including 6 of 12 from beyond the 3-point arc, and posted career highs for rebounds and assists, both with seven. Josh McFolley added 20 points for the Titans (3-3).

Nicholls State 62, Western Michigan 61, OT: Gavin Peppers’ layup with 22 seconds left in overtime lifted Nicholls State to victory in the Emerald Coast Classic in Niceville, Fla. Josh Davis’ layup for the Broncos with 24 seconds remaining in regulation tied it at 55. Davis finished with 10 points and 10 rebounds while Seth Dugan poured in 22 points and snatched 12 rebounds for Western (4-3). Michael Flowers added 17 points for the Broncos, who defeated Southern University, 85-70, Friday in the tournament.Peppers’ 18 points led three Nicholls State players in double figures as Danny Garrick had 12 and Elvis Harvey 10 for the Colonials (4-3).

(At) Oakland 87, Oral Roberts 76: Jaevin Cumberland and Xavier Hill-Mais combined for 59 points as Oakland rallied in the second half to beat Oral Roberts. Cumberland had a career-best 31 points, hitting 7 of 12 from the floor and making 15 of 15 free throws. Hill-Mais was 10-of-20 from the floor, making 8 of 9 free-throw attempts for 28 points as Oakland was 26 of 28 from the line. Oral Roberts made 11 of 15 free-throw attempts. Braden Norris also had a career-high 14 points for Oakland (3-3). Oral Roberts held a 37-35 halftime advantage but the Grizzlies started the second half on a 15-5 run to go ahead 50-42 less than five minutes into the second period. Emmanuel Nzekwesi had 18 points and 19 rebounds for ORU (2-6). Kearns added 14 points and Kaelen Malone chipped in 13.

No. 10 Texas 69, Michigan 52: Deja Church scored 12 points and Amy Dilk added 10 for the Wolverines in the semifinals of the Gulf Coast Showcase in Estero, Fla. Michigan (4-1) shot 17 percent in the first half and 29 percent for the game, and will square off with Washington for third place in the eight-team event.

Slippery Rock 65, Wayne State 63: At the Ashland Thanksgiving Tournament, an 11-0 run by Slippery Rock proved to be the difference in a contest that featured 15 lead changes. Brooke Hinderliter, who made two free throws with 5.3 seconds left, scored 21 for Slippery Rock (2-3). Nastassja Chambers had 17 points and Ja’Nae Williams 14 while Sam Cherney hauled in 14 rebounds for Wayne State (1-3).

(At) No. 22 Buffalo 76, Marist 49: CJ Massinburg scored 21 points, Jayvon Graves added 16 and No. 22 Buffalo (5-0) brushed off Marist’s attempt to slow the pace. Jeremy Harris had eight assists and Nick Perkins pulled down seven rebounds for the Bulls (5-0). Ryan Funk and Austin Williams each scored 10 points to lead Marist (1-4).