Ferris State hung on to beat Northwest Missouri State, 27-21, while Hillsdale fell to Notre Dame College, 19-14. The region final is next for the Bulldogs. 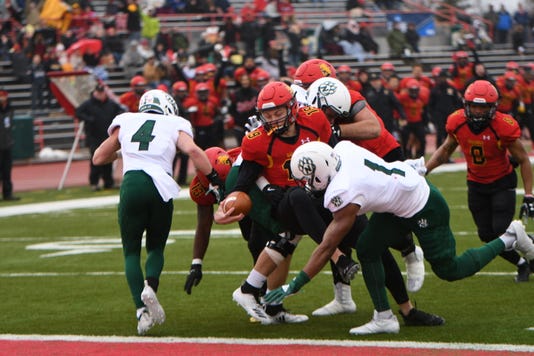 But Ferris State is moving on in the Division II football playoffs.

Ferris State survived Northwest Missouri State's late touchdown and onside-kick recovery to hang on for a 27-21 victory at Top Taggart Field on Saturday.

The Bulldogs posted all that offense despite the absence of star quarterback Jayru Campbell, a Harlon Hill Trophy candidate who didn't play. The former Detroit Cass Tech star's absence was injury-related, a school spokesman said. He was hurt in last week's game and while he finished that game, he didn't practice all this past week.

It was quarterback-by-committee for Ferris State, with Travis Russell getting the bulk of the work and throwing for 147 yards, and Brett Mooney 69. No matter, the Bulldogs got it done on the ground, with Marvin Campbell rushing for 84 yards and a touchdown, Russell rushing for 80 and a score, and Evan Cummins also scoring a TD. 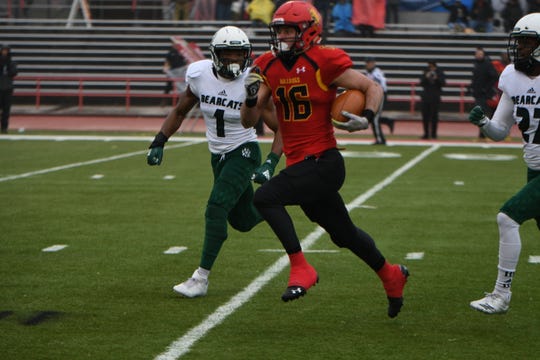 Ferris State led 27-14 to start the fourth quarter and still held that lead late, until Wright found Alec Tatum for a 2-yard touchdown pass with 14 seconds left to make it 27-21.

Ferris State will play for a regional championship for a second consecutive season. Last year, it was denied a trip to the national semifinals in a 16-14 loss to Harding.

The Bulldogs are seeking their first Division II national championship, and could join the Ferris State basketball team as only one of two schools to hold the football and basketball titles at the same time (Florida, 2009).

In South Euclid, Ohio, Hillsdale led 14-10 after three quarters, but its season slipped away in the final three minutes of this game.

Hillsdale got the ball back and, starting on its own 25, quickly drove down the field, thanks to a 19-yard pass from Chance Stewart to David Graham, followed by a 41-yard pass from Stewart to Trey Brock. That got Hillsdale (10-3) to the Notre Dame 27. Hillsdale eventually got to the 14 with seven seconds left.

But back-to-back incomplete passes by Stewart sealed the game.

Stewart finished 17-for-36 for 322 yards and a touchdown, with Brock catching eight passes for 172 yards and a score.

Notre Dame next plays Slippery Rock, a 59-20 victor over New Haven on Saturday.