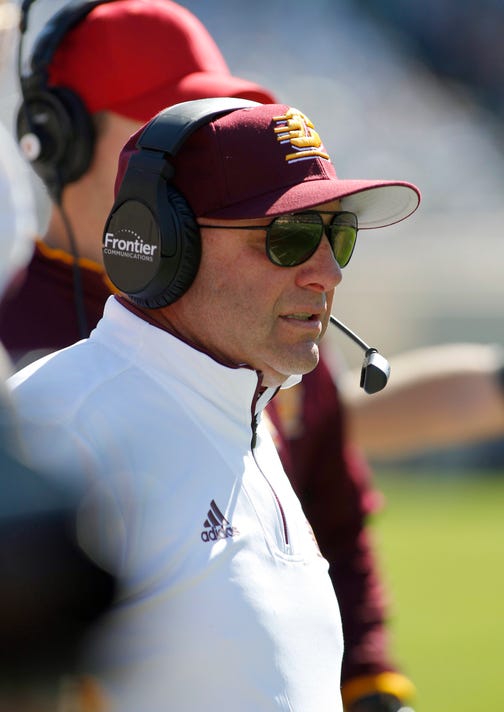 Bonamego, fired as coach Friday night following a 1-11 season, called his opportunity to coach his alma mater and "absolute honor" and "something that I will cherish for the rest of my life."

Bonamego has not spoken publicly since his firing, and declined an interview request from The News.

"When I took over as Central Michigan's Head Football Coach in 2015, I stated that this was not just "a job" to me, but rather "THE Job." From the moment I stepped on CMU's campus in the Fall of 1982 as a freshman walk-on, I dreamed of the day when I would join the likes of Bill Kelly, Roy Kramer, and Herb Deromedi in leading this historic program.

Although my tenure as your Head Coach did not end the way I had envisioned, I am nothing but grateful for these past four seasons and the opportunity to lead the Maroon and Gold. To the students, alumni, and fans of CMU — thank you for all of the love and support you have shown to me and my family. To all the incredible young men I had the honor to coach — I can't thank you enough for your efforts and the work you put into OUR program.

It has been my absolute honor to serve as your Head Coach, and the relationships I formed with each and every one of you are something that I will cherish for the rest of my life. While I wish we had been able to bring a Championship back to Mt. Pleasant, I leave here with no regrets.

I gave my all to this program and these players, and I put in an honest day's work every time I stepped on campus. Not many people are able to save they lived their dream — I lived mine and I have all of you to thank for making it everything I had imagined. Fire Up Forever!"

A couple of days ago on Twitter, Bonamego urged fans to get behind the new coach.

Bonamego, who grew up in Paw Paw, Mich., coached four seasons in Mount Pleasant, taking the job after serving as Detroit Lions special-teams coordinator. He had success the first three seasons, taking Central to three bowl games, but this year, almost nothing went right.

Central never found its quarterback this season — following the departure of last year's starter Shane Morris — and its offense was among the worst in the nation.

In four seasons, Bonmago was 22-29. He signed an extension last December that was to run through 2022 and pay him just under $700,000 a year. Bonmaego and university representatives are negotiating his buyout, which contractually is worth more than $1 million.

Athletic director Michael Alford plans to cast a wide net in search of his replacement, as Alford prepares to make his first major hire since taking over in the spring of 2017. He already was on the road Saturday — one day after the ugly loss at Toledo, and Bonamego's firing — and is expected to seek an offensive-minded head coach, given the problems the Chippewas faced this season.

Alford could stay local in his search, but given his ties to the Big 12 — he came to Central after serving in the Oklahoma athletic department — he is very likely to dip into that pool of contacts, too.

It's unclear if any of Bonamego's staff will be retained. Defensive-backs coach Cory Hall is serving as the interim head coach.