The Detroit King standout — just named Mr. Football — has remained mum on his commitment to Central Michigan in the wake of John Bonamego's firing as head coach last week. 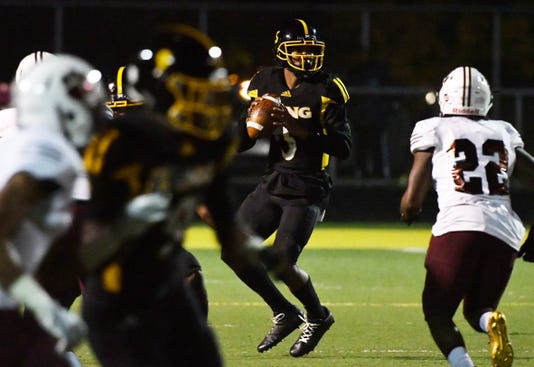 Central Michigan is in desperate need of a quarterback to turn around an offense that was among the worst in the nation this past season.

And the program hopes Dequan Finn is that quarterback.

But the Detroit King standout — just named Mr. Football for the state of Michigan — has remained mum on his commitment to Central in the wake of John Bonamego's firing as head coach last week.

Following the 41-25 victory over Muskegon in the Division 3 championship game last weekend, Finn shrugged off the questions about his future.

“I’m not going to say anything about that,” Finn told reporters, including The News' David Goricki. “I’m just trying to enjoy a win with my teammates.”

His commitment hasn't stopped other schools from swooping in, including Cincinnati, which recently extended an offer.

Finn wrote on Twitter this week he was "blessed" to receive the offer, which, according to 247Sports, is the 12th he's received.

Blessed to have receive an offer from Cincinnati!! #Gobearcatspic.twitter.com/sdJne8aeMc

Central already has lost to Detroit commitments, both from Detroit Cass Tech: receiver Kyron McKinne-Harper and safety Ormondell Dingle. They both wrote on Twitter that they are re-opening their recruitment.

The three-star prospect, who is 6-foot-1 and 183 pounds, is ranked the 25th-best dual-threat quarterback in the nation by 247Sports, and 31st per the 247Sports composite.

Meanwhile, Central suffered another blow Thursday when junior defensive back Sean Bunting, first-team All-Mid-American Conference this season, announced he was skipping his senior to enter the NFL Draft.

"Despite the recent struggles as a team, my time at CMU has been an incredible experience," Bunting wrote, referencing the 1-11 season that led to Bonamego's firing following the regular-season finale last Friday. "I am forever grateful to Coach Bono for the opportunity, believing in and challenging me to be great!"