The No. 22 Black Knights reach 11 wins for the first time in program history. 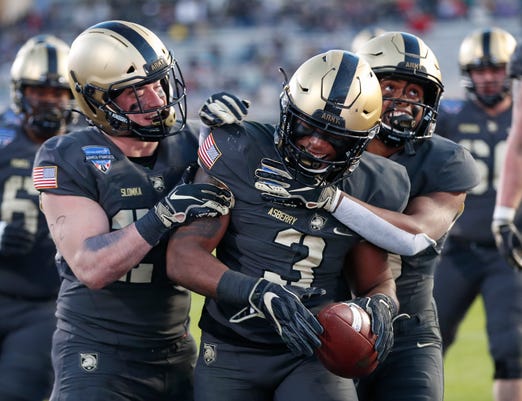 Army running back Jordan Asberry (3) celebrates his touchdown with wide receiver Glen Coates, right, and running back Connor Slomka, left, during the second half Saturday of the Armed Forces Bowl in Fort Worth, Texas. Army won 70-14.(Photo: Jim Cowsert, AP)

Fort Worth, Texas — Army quarterback Kelvin Hopkins Jr. initially ran right before cutting back the other way and eluding a tackler. He sent two other defenders sliding to the ground when he switched directions again and took off toward the end zone.

That nifty 77-yard run was one of his Armed Forces Bowl-record five rushing touchdowns as the No. 22 Black Knights overwhelmed Houston 70-14 on Saturday to reach 11 wins for the first time in program history.

“Just trying to get back to the line of scrimmage,” Hopkins said. “There was this huge convoy of guys right there when I was running in. … I just felt like people were on me. I thought it was Houston, and I realized it was gray jerseys. It was a really good team win.”

Houston (8-5) lost for the fourth time in five games since starting 7-1 and getting into the AP Top 25 poll for one week in late October. The injury-plagued Cougars suffered their most-lopsided loss in their 27 bowl games, and their biggest loss overall since a 66-10 loss at UCLA during the 1997 regular season.

“That’s the hardest part to swallow, you’re 7-1,” second-year coach Major Applewhite said. “I’m proud of the way our kids fought. I’m not proud of losing the games at the end of the season the way we lost them.”

Hopkins ran 11 times for 170 yards before coming out of the game midway through the third quarter when it was 49-7. He also completed the first 1,000-yard passing season for Army since 2007. He was 3-of-3 passing for 70 yards, including a 54-yarder that set up one of his three 1-yard TD plunges. He also had a 2-yard TD run.

Army got 507 of its 592 total yards on the ground in its highest-scoring game this season – and the most points in the program’s nine bowl appearances. The Black Knights won a bowl for the third consecutive year, including last year’s Armed Force Bowl over San Diego State.

On the first play of the second quarter, on Houston’s first snap after Hopkins’ long TD run, Cameron Jones had a 23-yard fumble return for a score after James Nachtigal forced the turnover when he sacked Clayton Tune.

While Hopkins had his left arm in a sling after the game, he said he was “a little banged up” and that it was just a precaution. The junior quarterback’s 77-yarder on the last play of the first quarter made it 14-0.

“He did a really good job of finding an initial opening because it was almost a busted play,” Monken said. “It was not designed to go back that direction and he kind of skipped out of the way of a guy.”

Tune, the true freshman filling in for injured playmaker D’Eriq King, was 21-of-32 passing for 230 yards and was sacked 10 times. He was responsible for both Houston TDs, a 3-yard pass to Romello Brooker in the second quarter and a 6-yard run with 61/2 minutes left.

The Cougars didn’t have King or NFL-bound defensive tackle Ed Oliver. King, who will be back next season, was responsible for 50 touchdowns in 11 games before knee surgery. Oliver missed four games because of a bruised right knee, then skipped the bowl game to focus on preparing for the NFL draft.

“I love Ed to death, but there were more issues than missing Ed,” Applewhite said. “Give credit to Army.”

After a 10-loss season as freshmen, the Black Knights senior class won 29 games the past three seasons. They finished with back-to-back seasons of at least 10 wins. Army is an AP Top 25 team for the first time since 1996, the academy’s only other 10-win season.

“I knew we had something special going on in our program,” Monken said.

Wake Forest 37, Memphis 34: Jamie Newman scored on a 1-yard run with 34 seconds left to help give Wake Forest a victory over Memphis in Birmingham, Alabama.

The Demon Deacons (7-6) then had to wait to celebrate until Riley Patterson’s 43-yard field goal attempt went wide right as time expired.

Both teams scored touchdowns over the final 1:15. Memphis (8-6) lost a big lead for the second straight game after jumping ahead by 18 points in the first half.

Game MVP Newman ran for three touchdowns and passed for a fourth to lead Wake Forest, throwing for 328 yards and rushing 23 times for 91 more.

He led the Demon Deacons on a 75-yard drive starting at the 1:15 mark, covering most of it with completions of 49 and 20 yards to Alex Bachman.

The second catch was reviewed and the spot was upheld at the 1-yard line after Bachman’s right arm hit the pylon. Newman kept the ball for the go-ahead score.

Troy (10-3) secured the hard-fought win on Davis’ 20-yard touchdown run with 3:09 remaining, a play after Buffalo’s Tyree Jackson fumbled to give the Trojans possession. It was the Bulls’ third lost fumble.

The entertaining game that had several big swings in momentum, especially during a strange third quarter that featured Buffalo scoring seven points despite not running an offensive play.

Troy took a 21-17 lead on Smith’s 2-yard touchdown run with 9:47 left in the third and then immediately recovered an onside kick. The Trojans were driving for another score before a B.J. Smith fumble bounced into the hands of Buffalo’s Tyrone Hill, who ran 93 yards for a touchdown to give the Bulls a 24-21 lead.

Troy jumped ahead 35-24 after two quick touchdowns in the fourth quarter and held off Buffalo’s final rally.

Buffalo’s Jackson threw for 274 yards with a touchdown and an interception.

Buffalo (10-4) took the early 7-0 lead on Jaret Patterson’s 11-yard touchdown run less than two minutes into the game. The drive was helped by a spectacular 51-yard pass completion that bounced off K.J. Osborn’s hands and pinballed between a few Troy defenders before being caught by Buffalo’s Antonio Nunn.

Troy bounced back quickly with its own huge gain through the air – a 60-yard touchdown from Sawyer Smith to Tray Eafford.

The game stayed tight throughout the first half and Buffalo took a 17-14 lead late in the second quarter on Adam Mitcheson’s 41-yard field goal. The Bulls had the halftime lead despite three turnovers, including two fumbles.

Louisiana Tech 31, Hawaii 14: Skip Holtz felt the need to refocus his players after they spent the better part of a week in paradise.

The sixth-year Louisiana Tech coach dressed down his team one night before the bowl game and it certainly appeared to pay off.

J'Mar Smith threw a touchdown pass and ran for another score in a big third quarter to lead Louisiana Tech (8-5), which rallied from a 7-3 halftime deficit to secure their fifth bowl victory in as many seasons, a program first.

"I got a little bit upset (Friday) night, got a little emotional last night because I felt like we were here for vacation and the bowl game, not for the win, and I was wrong. These guys flipped the switch, they went out there and they played their tails off," Holtz said.

Smith threw for 285 yards on 19-of-31 passing with an interception. He tossed a 58-yard touchdown to Jaqwis Dancy and scored on a 4-yard run that was part of a 21-point third quarter.

Louisiana Tech took the lead for good on Israel Tucker's 5-yard TD run with 10:27 left in the third.