Bruno Fernando had a career-high 25 points and 13 rebounds, Anthony Cowan Jr. scored 24 and the Terrapins rallied past the Hoosiers 78-75. 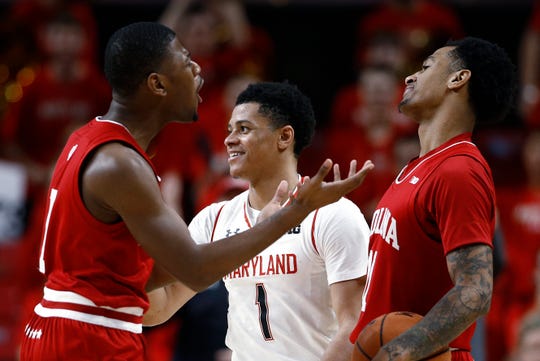 College Park, Md. — Maryland gave up the game’s first nine points, trailed by 14 with 13 minutes elapsed and faced a double-digit deficit early in the second half.

Strangely enough, with this team that’s just about a sure-fire formula for victory.

Bruno Fernando had a career-high 25 points and 13 rebounds, Anthony Cowan Jr. scored 24 and the Terrapins rallied past No. 22 Indiana 78-75 Friday night.

“Just an incredible win, because we were not very good at the start,” coach Mark Turgeon said.

Three times during their winning streak, the Terrapins rebounded from a halftime deficit. It also happened on Jan. 2 against then-No. 24 Nebraska and at Minnesota on Tuesday.

The Terps are 5-1 this season when trailing at the break. Not bad, but it’s been tough on their coach.

“Hopefully we can become a better first-half team,” Turgeon said.

Indiana went 16-for-16 at the foul line and committed only seven turnovers, but that was offset by Maryland’s 18 offensive rebounds.

“We just couldn’t get it done on the glass tonight,” coach Archie Miler said. “We just gave them 18 second shots and that was the difference in the game.”

Fernando led the charge with five offensive rebounds, some of which he turned into put-backs. He went 11-for-12 from the field to surpass his previous career best of 21 points.

“He was as good as it gets in terms of what he was being asked to do: finishing around the rim, offensive rebounding,” Miller said. “He’s a load.”

After Morgan made the first basket after halftime to make it 37-27, the Terps used their 16-point surge to take the lead for the first time.

Cowan and Darryl Morsell each contributed five points to the surge, and Maryland applied a tight zone defense to force Indiana into nine successive missed shots.

“We really keyed in on defense. We were able to get some easy ones in transition,” Cowan said.

The Terrapins never lost the lead, in part because their only turnover of the second half came with 11 seconds left. And that is how you make up for a lousy first half.

“Obviously, we had another slow start,” said Cowan, who finished with a game-high seven assists. “We’ve got to figure that out. But we really keyed in on the game plan and started playing.”

Maryland star freshman Jalen Smith went 0-for-7 during a scoreless first half and finished with 2 points on 0-for-9 shooting, but he contributed 10 rebounds.

The victories over Nebraska and Indiana mark the first time since the 2001-02 season that Maryland defeated ranked teams in succession at home.

Hurts entered his name into the NCAA transfer portal earlier this week and is checking out possible destinations. Locksley was the offensive coordinator at Alabama, so player and coach know each other well.

During the first half, when Locksley was shown on the scoreboard screen, many of the students shouted in unison, “We want Jalen!”

Though it’s not necessarily an unusual occurrence in the Big Ten, the Hoosiers are a completely different team on the road (1-4) than at home (10-0). After playing brilliantly at the outset, Indiana unraveled during a horrid second half.

The young, inexperienced Terrapins appear to have grown up. Undaunted by an early deficit against a ranked and storied college basketball team, Maryland played lights-out over the final 19 minutes on both ends of the floor.

Purdue 84, (at) Wisconsin 80, OT: Carsen Edwards scored 36 points as the Boilermakers (10-6, 3-2 Big Ten) did most of their damage from the free throw line in overtime. Though they finished the game 17 of 30 from the line, which included 8 for 12 in overtime to seal the win.

Wisconsin, meanwhile, came in averaging 9.1 turnovers a game, second best in the NCAA. But the Badgers (11-5, 3-2) committed 17 for the game, including two in a key overtime stretch as they managed only a D’Mitrik Trice free throw over their final five possessions.

Wisconsin made it to overtime thanks to some late heroics by Trice in the final 30 seconds of regulation. Just 2 of 10 before the final stretch, he hit back-to-back 3 pointers to tie the game at 74. Edwards airballed a long 3-point attempt with 3.2 seconds left in regulation, and Trice’s wild attempt under pressure at the horn was off.

Edwards was 3 of 16 from the field on Tuesday as the Boilermakers lost to Michigan State. That included 2 of 13 from 3. But he hit his first three 3-point attempts and was 6 of 14 from the arc. But he still shot 10 of 26.

(At) IUPUI 82, Detroit Mercy 47: Macee Williams scored 19 points to lead four IUPUI players in double figures scoring as Detroit Mercy fell to its ninth straight defeat. Zoey Oatis had 11 to lead the Titans (2-13, 0-4 Horizon). Holly Hoopingarner and Katelyn O'Reilly each had 14 points and Brittany Welch added 13 points for the Jaguars (9-7, 3-2).

(At) UIC 69, Oakland 65, OT: Taylor Jones had 21 points to go along with a career-high 18 rebounds and Kahlaijah Dean added 14 points for Oakland (4-11, 1-3 Horizon), which enjoyed a 25-7 run in the third quarter only to see a five-point lead erased in the final 28 seconds of regulation. UIC's Kiarra Thompson, who finished with 17 points, hit a jumper to ignite the rally. Brittany Byrd, who had 16 points, hit then a pair of free throws before Jasmine Gaines hit the frontend of a one-and-one with 12 seconds left to tie it 55-all. UIC (3-13, 1-4) outlasted Oakland 14-10 in the extra session.