The Wolverines (21-11) fumbled away an inbounds pass and a chance to win with 1.5 seconds left in a 73-72 defeat in Indianapolis. 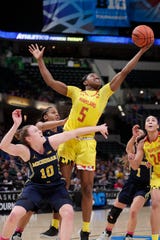 Indianapolis —  No. 8 Maryland celebrated the school’s 1,000th victory with a race to midcourt.

Another win this weekend and the Terrapins will throw a much bigger party.

Kaila Charles made two free throws with 10.3 seconds left, and Maryland topped Michigan 73-72 on Saturday to advance to the Big Ten Tournament final for the fifth straight year.

After the Wolverines fumbled away an inbounds pass with 1.5 seconds to go, securing the landmark win for the Terps, Charles and company went into a joyous postgame sprawl.

“It speaks volumes about the University of Maryland and the program and the legacy,” said Brenda Frese, who has coached Maryland to 457 wins. “I can’t say enough about the two coaches before me who set the standard for me to follow. Obviously we’re one of just a few programs in the country to own a milestone like this and it’s pretty special.”

Maryland (28-3) is the 12th Division I school to achieve the feat. The Terps had to earn this one, too, pushed to the limit by the resurgent Wolverines (21-11).

Nicole Munger scored 20 points for Michigan, and Naz Hillmon had 16.

It looked as if it might hold up when the refs awarded Frese a timeout with 10.3 seconds to go, a split second before Charles split a double team and got a short jumper to roll in.

Instead, Frese drew up a play and when Charles broke toward the basket, she was tugged by Hillmon. Charles made both foul shots and finished with 22 points.

Then the Wolverines got their chance.

The first shot, Amy Dilk’s short floater, was swatted out of bounds by Shakira Austin. Michigan called another timeout, but Hallie Thome lost the ball on the inbounds pass.

“I thought we had a chance to win the game,” Michigan coach Kim Barnes Arico said. “Our goal coming into the year was to win a Big Ten championship, and we felt like we put ourselves in a good position to do that tonight. We just came up a little bit short.”

Michigan led 40-34 at halftime and rallied from a 67-59 deficit with 8:15 to play. But the league’s most dominant school over the past five seasons finally found a way to win No. 1,000 on its first try.

“I’m glad I was able to get the opportunity to play for this program under coach Frese,” Charles said. “And I’m glad I’m a part of making history here in the program.”

Nobody wants to see Michigan in the NCAA Tournament. The Wolverines are playing with confidence, having fun and winning games. And it’s made a difference. On Jan. 28, the Wolverines were 10th in the conference standings. Since then, they climbed six spots to earn a double-bye, beat Wisconsin in overtime to reach their first semifinal since 2001 and nearly pulled off a stunner against the Terps.

Maryland: The Terrapins certainly were out of sync. They had seven turnovers in the second quarter, nine in the first half and trailed at halftime for only the sixth time this season. But they got things together in the nick of time. It could hurt their argument for a No. 2 seed – especially if they struggle again Sunday.

Michigan's Hailey Brown finished with 14 points while Dilk, a freshman, had eight points and 11 assists in her hometown. The Wolverines are now 0-5 all-time in Big Ten tourney semifinal games.

Eastern Michigan 67, (at) Ball State 57: Jenna Annecchiarico had 19 points while Danielle Minott finished with 16 points and 10 rebounds for her fifth career double-double as Eastern  erased a 13-point deficit to win at Ball State for the first time in four years. Maliah Howard-Bass had 18 points to lead Ball State (8-22, 3-15 MAC). Nine-seed EMU (13-16, 6-12 MAC) opens the first round of the MAC tournament at 8-seed Akron on Monday. Tip-off is 5 p.m. The winner faces 1-seed Central Michigan at noon Wednesday in the quarterfinals.

(At) Central Michigan 78, Toledo 45: Reyna Frost finished with 32 points and 11 rebounds while Presley Hudson tallied 28 points and 10 rebounds as the Chippewas earned the No. 1 seed and a first-round bye in the MAC tournament. Micaela Kelly added 14 points for Central (24-6, 15-3 MAC), which awaits the winner of Monday's Eastern Michigan-Akron first round game in Wednesday's quarterfinals. Six-seed Toledo (19-10, 11-7) hosts 11-seed Ball State on Monday.

Northern Illinois 74, (at) Western Michigan 71: Mikayla Voigt scored 26 points to lead Northern Illinois (18-12, 10-8), which secured the seventh seed and will host 10-seed Western on Monday in the first round of the MAC tournament. Leighah-Amori Wool scored 19 points, Jasmyn Walker added 17 and Deja Wimby 13 for the Broncos (10-19, 4-14), who enter the postseason having lost three of their last four.