Xavier Hill-Mais, Jaevin Cumberland and Brad Brechting will return to OU rather than pursue grad transfers. 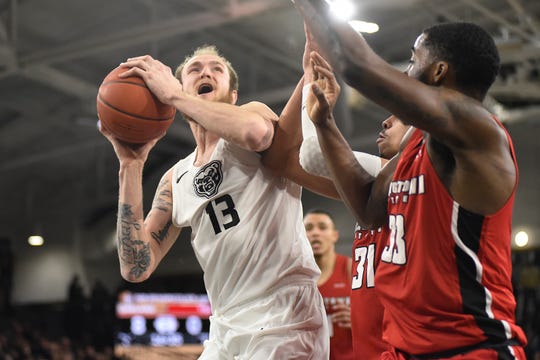 In this era of grad-transfer craziness, the Oakland men's basketball program received some welcome news Friday.

Forwards Xavier Hill-Mais and Brad Brechting, and guard Jaevin Cumberland, all of whom will graduate this spring, announced they will return to the Golden Grizzlies.

All three were eligible to transfer elsewhere for their final seasons, but instead will enroll in master's programs at Oakland.

"Jaevin, Xavier and I came in with each other and started something that will never split us apart," Brechting said. "We love Oakland and it is our family. We have unfinished business next season and are determined to complete our mission."

Added Cumberland: "The three of us have been together since Day 1 and we want to finish what we started together. We want to win a championship together and for our great fans. We came in with a mission and want to complete that mission."

The trio's announcement means Oakland will be a veteran team next season, and should be picked to finish well up the Horizon League standings. That's a far cry from this season, in which youth was the prominent story line, and expectations were modest, at least early in the season — before Oakland rallied down the stretch to finish third in the regular-season standings.

Oakland finished 16-17, its last game a heartbreaking, 64-63 loss to Northern Kentucky in the Horizon League tournament semifinals at Little Caesars Arena on Monday.

"I am honored to be returning to Oakland University," Hill-Mais said. "After meeting with the coaching staff it is in my best interest to prolong my athletic and academic career alongside Brad and Jaevin."

Guard C.J. Gettelfinger, from Tennessee, is the prize recruit for the class of 2019. He is coming off wrist surgery, and could be a redshirt candidate.

In other Oakland news, coach Greg Kampe announced the team will not participate in a postseason tournament this year — it was unlikely anyway, given the Golden Grizzlies finished under .500 — but will take an August trip to Greece.