ESPN's Charlie Creme has all three projected to make the field when the bracket is unveiled Monday night. 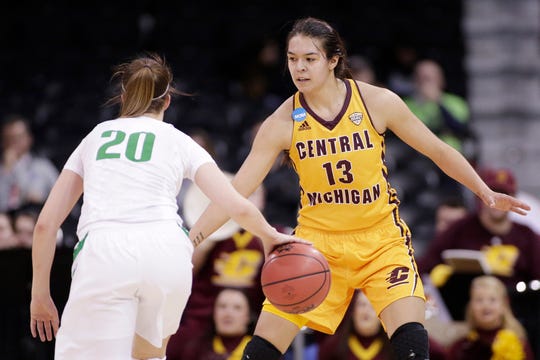 These might be some nervous days inside the women's basketball programs at Michigan, Michigan State and Central Michigan.

But ESPN's resident women's bracketologist Charlie Creme has an encouraging message for all of them:

Creme has all three teams safely in his projected NCAA Tournament bracket, even the mid-major Chippewas, following their 82-77 loss to Buffalo in the Mid-American Conference tournament semifinals in Cleveland on Friday.

"CMU is safe for a bid," Creme told The Detroit News, via email. "An RPI in the 20s with a couple of nice NC (nonconference) wins, especially Miami, and playing Louisville so tough, is more than enough this year."

The Chippewas, led by MAC player of the year Reyna Frost and Presley Hudson, won the MAC regular-season championship.

It comes a year after Central Michigan stormed into the Sweet 16, a historic run for the program. Last year's performance has no merit on this year, though, Creme said.

"But the rest of the country won't be surprised by CMU this time around," he said.

Creme early Friday had Central Michigan (25-7) listed as a No. 7 seed, but that could fall a bit following the MAC tournament loss to Buffalo.

Coach Sue Guevara said after Friday's loss that she believes her team absolutely has earned an at-large bid, but didn't want to consider it a lock.

No worries. Creme will do that for her.

"Michigan was not much in the picture early, but just started winning too much to ignore once we got into the new year," Creme said of Michigan, seeking a second consecutive NCAA Tournament bid and third in seven years under coach Kim Barnes Arico. "The Wolverines are definitely tournament-worthy, but I don't see a long stay."

The Wolverines, led by freshman forward Naz Hillmon, used a seven-game winning streak late in conference play to get into the postseason picture.

The Spartans, led by senior center Jenna Allen, have been a bit tougher team to read. They have big wins, including against then-No. 3 Oregon, and some bad losses, too. They were 15-1 at home, 5-10 elsewhere.

"Michigan State is a tough team to get a handle on with the big wins, but strange losses," Creme said. "Hard to picture any team could beat Oregon and also lose to Wisconsin. The capability is there to pull off a stunner. The Spartans did it before, but I'm not sure they can be relied upon. This is a team whose seed could be much debated by the committee depending how the individual members view the wins vs. losses.”

This would be the ninth NCAA Tournament bid in Suzy Merchant's 12 years as coach.

The women's NCAA Tournament bracket will be unveiled at 7 p.m. Monday, on ESPN.