Central Michigan and Michigan State will play Saturday, while Michigan will play Kansas State on Friday. 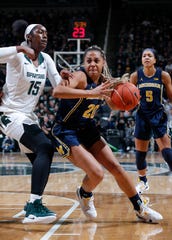 A technical gaffe by ESPN has eased the tensions for women's basketball programs at Central Michigan, Michigan State and Michigan.

ESPN confirmed the authenticity of the leaked bracket Monday afternoon, and as result pushed up the announcement two hours, to 5 p.m. on ESPN2. It was scheduled to air at 7 p.m. on ESPN.

“In working with the NCAA to prepare for tonight’s Women’s Selection Special we received the bracket, similar to years past," ESPN said. "In the midst of our preparation, the bracket was mistakenly posted on ESPNU. We deeply regret the error and extend our apology to the NCAA and the women’s basketball community. We will conduct a thorough review of our process to ensure it doesn’t happen in the future."

Central Michigan (25-7), the Mid-American Conference regular-season champion, gets a No. 8 seed and will open against No. 9 Michigan State (20-11) on Saturday in the South Bend, Ind., pod, hosted by No. 1 Notre Dame. This will be quite the intriguing matchup for Chippewas coach Sue Guevara, who had a long run as an assistant coach with the Spartans. Spartans coach Suzy Merchant played at Central Michigan.

Central Michigan made a surprising run to the Sweet 16 last season.

Michigan (21-11), meanwhile, gets a No. 8 seed and open against Kansas State in the Louisville, Ky., pod on Friday.