The 44th president of the United States, in keeping with the annual tradition he started while he was in office, again filled out both the men's and women's NCAA Tournament brackets. 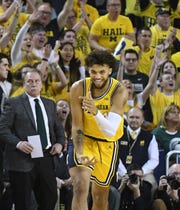 He's got more time on his hands these days.

So, maybe, just maybe, President Obama will do a little better in his brackets this year.

The 44th president of the United States, in keeping with the annual tradition he started while he was in office, again filled out both the men's and women's NCAA Tournament brackets.

And he's paying much more attention to Michigan than some others (ahem, Hillary).

Obama has picked Michigan. a No. 2 seed that gets under way Thursday night in Des Moines, Iowa, to make a second consecutive Final Four, before losing to Duke in a national semifinal. Obama has Duke winning it all, over North Carolina.

Just in the nick of time: My brackets have never been my one shining moment, but here we go again. You can check out my #MarchMadness picks here: https://t.co/c3bjNrIo4wpic.twitter.com/EcCUdnZjun

More: Michigan vs. Montana: Who has the edge

More: Michigan State vs. Bradley: Who has the edge

Obama also has Michigan State, another No. 2 seed that gets under way Thursday afternoon against Bradley, advancing to the Elite Eight, before losing to top-seeded Duke.

His other Final Four team, by the way, is Tennessee.

On the women's side, Obama has Connecticut winning it all, over Baylor, with Mississippi State and Notre Dame also in his Final Four.

Locally, he picks Central Michigan to get by Michigan State in the opening round before losing in the second round to Notre Dame. He has Michigan losing its opener to Kansas State.

During his time in office, Obama picked between 59 and 70 percent of the men's NCAA Tournament games right, while correctly picking about 25 percent of the Final Four teams.

Last year, he picked Michigan State to win it all, beating Virginia in the championship game. The teams combined to win one NCAA Tournament game, with Virginia becoming the first-ever No. 1 seed to lose its opening game to a No. 16 seed.