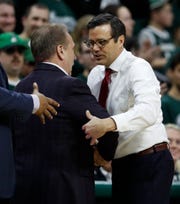 Lincoln, Neb. — Nebraska fired seventh-year coach Tim Miles on Tuesday after the Cornhuskers finished 13th in the Big Ten and failed to make the NCAA Tournament for a fifth straight year.

Athletic director Bill Moos announced the firing two days after the Huskers finished a 19-17 season with an 88-72 loss to TCU in the second round of the NIT.

Much was expected of the Huskers this season. They brought back four starters from a 22-win team that was fourth in the Big Ten, and the question among fans and media wasn’t whether Nebraska would be in NCAA Tournament but how deep a run it could make. But the Huskers went into a free fall in January and February, losing 11 of 13.

Miles was 116-114 overall and 52-76 in Big Ten regular-season games. Nebraska was 10th or lower in the conference in five of Miles’ seven years.

“Tim Miles is a good basketball coach who has put his heart, soul and energy into the Nebraska men’s basketball program over the past seven years,” Moos said. “Ultimately, we have not maintained a level of consistent success and stability on the court, and after a full review I have made the decision to move in another direction for the leadership of our program.”

The only time Miles got the Huskers to the NCAA Tournament was in 2014, when they won eight of their last nine regular-season games to finish fourth in the Big Ten and he was named conference coach of the year. Three straight sub-.500 seasons followed. Last season, Nebraska set a school record with 13 conference wins. But the Huskers were victims of a down year for the Big Ten and weren’t selected for the NCAAs.

A special thank you and deep gratitude to our players and parents who have been with us and supported us over the years.  Thanks to our coaches, legends, alumni and to all of the support staff who interact with our program on a daily basis and made the experience one I will

The Huskers started this season 13-4 and appeared in The Associated Press Top 25 for the first time since 2014. The Huskers were dealt a blow when second-leading scorer and starting lineup fixture Isaac Copeland went out for the season with a knee injury Jan. 26, but by then the season was on its way toward unraveling.

“Thank you to the University of Nebraska for a remarkable journey,” Miles tweeted. “It was a great honor to represent this university the past seven years. I am extremely proud of what we were able to accomplish during my tenure, most notably developing relationships with so many fantastic people associated with the Huskers… My family will always be cheering for the Huskers and look forward to seeing #Nebrasketball make history in the near future.”

The Huskers lost by double digits seven times during the skid, and Miles rankled some fans with one of his comments on a podcast with Jeff Goodman of WatchStadium.com.

“If they fire me, they’re still going to pay me. I’m still a millionaire, so I’ve got that going for me,” Miles said. He later issued an apology.

In a head coaching career dating to 1995, this is the first time the 52-year-old Miles has been fired. Former athletic director Tom Osborne hired the South Dakota native away from Colorado State in 2012 after he led the Rams to a 20-win season and the NCAA Tournament.