John Beilein landed his first Division I head-coaching job at the young age of 39. Beilein's son, Patrick, will beat that feat by three years.

John Beilein landed his first Division I head-coaching job at the young age of 39. Beilein's son, Patrick, will beat that feat by three years. 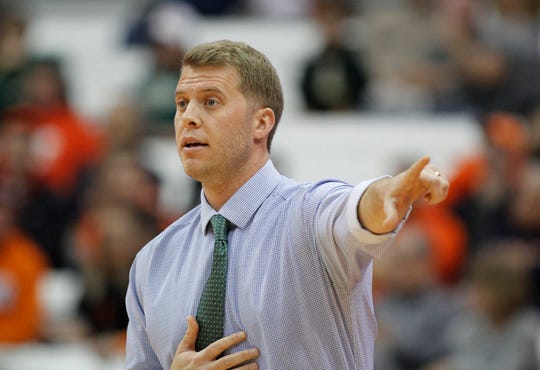 Patrick Beilein is the new head coach at Niagara, near Buffalo, N.Y., the school announced Thursday.

"My family and I are very excited to have this opportunity to be the next men's basketball head coach at Niagara University and to be back in Niagara County and Western New York," Beilein said in a statement.

The Athletic reported Beilein gets a five-year contract.

Beilein, 36, just completed his fourth season at Le Moyne College in Syracuse, N.Y., where he made the Division II NCAA Tournament each of the last three years, with a run to the Elite Eight in 2018.

At Le Moyne, where John Beilein coached for eight years in the 1980s and early 1990s, Patrick Beilein was 77-41. Before Le Moyne, Patrick was 32-27 in two years at Division II West Virginia Wesleyan.

Patrick Beilein has been considered a Division I coach in waiting for several years now.

There were rumblings a couple years back that he might join his father's staff at Michigan, but Patrick decided it was best to stand on his own name and remain a head coach, a move that now has paid off.

Niagara is coming off a 13-19 season, and fired coach Chris Casey after six seasons. The program has made three NCAA Tournaments, most recently in 2007.

Niagara plays in the Metro Atlantic Athletic Conference, the same conference John Beilein landed his first Division I coaching job — with Canisius in 1992.

Patrick Beilein played under his father at West Virginia, then was on staff at Michigan as a graduate assistant from 2008-10. He then had jobs at Dartmouth, Bradley and the Utah Jazz before taking the Le Moyne job.