The No. 1 overall-seeded Bears won their 27th straight game. 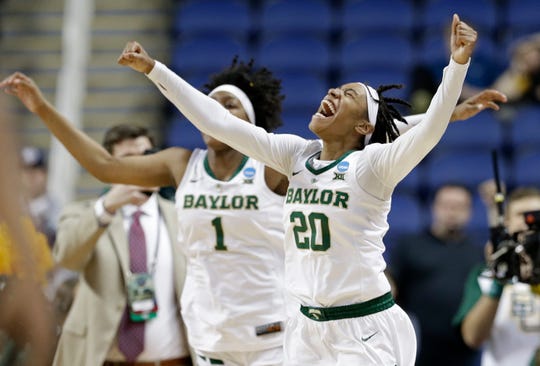 Greensboro, N.C. — Maybe someone at the Final Four will actually give Baylor a game.

Four rounds into the NCAA Tournament, and the Bears have barely faced any resistance.

Baylor cruised to its first Final Four since 2012 with its latest bracket blowout, this one an 85-53 rout of Iowa on Monday night in the Greensboro Regional final.

“We’re getting up,” forward Lauren Cox said, “and we’re not letting people get back in the game.”

Cox had 22 points and 11 rebounds, Didi Richards added 16 points and 10 rebounds and Chloe Jackson had 14 points.

The No. 1 overall-seeded Bears (35-1) won their 27th straight game by shooting 53 percent, clamping down on All-American Megan Gustafson and her supporting cast and holding the nation’s best shooting team to a season-worst 32 percent.

Their four tournament victories have come by an average of more than 38 points with none closer than 25. Now, it’s on to Tampa, Florida, for the school’s fourth Final Four and its first in seven years, when the Bears won their second national championship.

The 6-foot-4 Cox — a third-team AP All-America pick selected as the region’s most outstanding player — and fellow twin tower Kalani Brown, a 6-7 second-team All-American, teamed up to dominate both the glass and the heavily hyped matchup with Gustafson, the nation’s leading scorer at 27.9 points per game.

Brown finished with 14 points, and Baylor held a 47-26 rebounding advantage with 20 second-chance points to six for Iowa. The Bears also outscored the Hawkeyes 52-24 in the paint.

“Baylor was obviously too much for us today,” coach Lisa Bluder said.

Gustafson finished with 23 points on 9-of-17 shooting, but was held without a rebound in the second half for second-seeded Iowa (29-7). Kathleen Doyle and Tania Davis each had 10 points.

“We just tried to limit her touches,” Cox said. “She’s a good player. She’s going to get her points. We just couldn’t let that second or third player go off.”

The Bears — who entered allowing their opponents to shoot a Division I-worst 31.4 percent — held Iowa way below its previous worst of 41.1 percent at Purdue on Jan. 10.

The Hawkeyes hadn’t made it this far into the bracket since 1993 — when C. Vivian Stringer led them to their lone Final Four — but their worst shooting night of the year came at the worst possible time. That was, of course, mostly due to the Bears and their stingy defense.

“I’m not going to define our season by the last 40 minutes,” Bluder said. “I don’t think we played our best game. Did Baylor have something to do with it? Absolutely.”

Maybe the Bears will face some game pressure in Tampa. They certainly haven’t so far in this tournament. They won their first three games by an average of 40.3 points, then turned the matchup of Cox and Brown against Gustafson into their latest mismatch.

Leave it to Baylor – which ranks second nationally with an average margin of victory of 27.2 points — to advance in blowout fashion. This one came after Sunday’s two regional finals produced tight, tense games, with a pair of No. 2 seeds — Connecticut and Oregon — winning by a combined 11 points.

Gustafson fell one rebound shy of setting an NCAA single-season record with her 34th double-double of the season. She’ll have to settle for sharing the record with two other players after she matched them with No. 33 in the Sweet 16. Baylor held her without an offensive rebound. “They had a little bit of a size advantage,” said the 6-3 Gustafson. “They were just throwing extra bodies at me.”

Baylor held the Hawkeyes without a field goal for a key five-minute stretch shortly before halftime while building a 16-point lead, then gradually stretched it into the 20s after halftime with a mix of jumpers and layups. The Bears went up 55-35 on NaLyssa Smith’s layup with 5½ minutes left in the third – and at that point, the Hawkeyes had as many shots blocked (three) in the quarter as they had go in.

The Fighting Irish are headed to the Final Four for the ninth time and will face UConn in Tampa Bay on Friday in a semifinal rematch from last year. They beat the Huskies and Mississippi State on last-second shots by Arike Ogunbowale to claim their second NCAA title.

Young scored seven points in an 11-2 run to end the third quarter that gave Notre Dame a six-point lead.

Ogunbowale finished with 21 points on 6-of-19 shooting, and the Irish pulled away in the second half for their 13th straight win after struggling to get their high-powered offense going.

Kiana Williams led Stanford with 20 points. Dijonai Carrington scored 18. Alanna Smith added 14 points and eight rebounds. But instead of advancing to the Final Four for the 14th time, the Cardinal came up short after winning their previous 12 games.

Tops in the nation in scoring at 89.2 points per game, Notre Dame struggled to get its offense going until that 11-2 run late in the third.

Young’s scoop layup put Notre Dame on top 45-44 with just over two minutes left in the quarter. She also drove for a layup in the closing minute to get the lead back up to six after Carrington made two free throws for Stanford.

Young added two baskets early in the fourth before Ogunbowale tracked down a loose ball and broke for a three-point play, making it 59-48 with 7:47 remaining.

The game was just the sixth between two storied programs that each have Hall of Fame coaches and two NCAA championships. But it marked the fourth time in five years they were meeting in the Sweet 16 or Elite Eight.

Notre Dame beat the Cardinal in the regional semifinals in 2015 with Stanford returning the favor the following season. The Cardinal knocked out the Irish in the 2017 Elite Eight, wiping out a 16-point deficit in the second half on the way to a 76-75 victory. Smith scored the go-ahead layup with 23 seconds remaining and Erica McCall swatted a last-second drive by Ogunbowale from behind to send Stanford to the Final Four.