The Chippewas enter this week's MAC tournament having won 15 straight games, three off the program record. 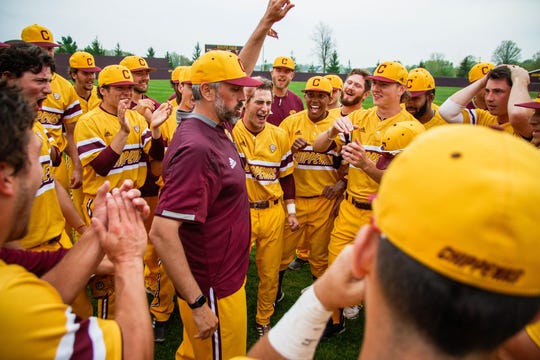 Central Michigan baseball has had its fair share of success over the years, including under the long tenure of previous coach Steve Jaksa.

But in recent years, the program definitely had more a feeling of a job than fun, and, well, college is supposed to be fun.

"I spent a little time with them," said the new head coach, Jordan Bischel, recalling those early days on the job last June and July, "and I felt, at times, our guys took themselves awfully seriously.

Winning, of course, helps on that front, and Central Michigan is doing all kinds of winning, having racked up a 43-12 record on the strength of a 15-game winning streak to close the regular season. The Chippewas enter this week's Mid-American Conference tournament in Avon, Ohio, as the No. 1 seed, and after a first-round bye, they open play Thursday against Kent State, Ohio, Miami or Northern Illinois, depending on how the first-round games shake out.

Central Michigan won its first MAC regular-season championship since 2015, is chasing the program record of 18 straight wins (1985), and is No. 18 in the latest Collegiate Baseball Newspaper national poll.

And the Chippewas have done that all with a smile on their faces. It's a goofy bunch, to be sure, whether it's junior right-hander Zach Kohn (Woodhaven) donning a Yoda mask in the dugout, or sophomore utilityman Chase Rollin (Beal City) lacing up his skates to take infield practice on a frozen-over Theunissen Stadium (and going viral in the process), or the entire team participating in in-game chants.

Bischel, after four seasons at Northwood, made the leap to Division I after Jaksa surprisingly announced his retirement — though, given Jaksa quickly signed on to coach at Saginaw Valley State, it was quite apparent that Jaksa's exit from Central Michigan wasn't necessarily all his choice.

New athletic director Michael Alford wanted a culture change, and he got one — more of a family culture, which started at the top with Bischel's coaches. Tom Winske, Bischel's college coach at St. Norbert College in Wisconsin, came aboard as a volunteer assistant; Tony Jandron, a teammate of Bischel's in college, became an assistant coach, also making the move from Northwood; and Kyle Schroeder joined Bischel as an assistant coach/recruiting coordinator, the third consecutive stop Schroeder and Bischel have worked together, after Northwood and Midland (Nebraska) University.

Culture is part of the equation, but so is talent, and Central Michigan wasn't hurting for talent when Bischel took over, he acknowledged. There wasn't a lot of roster turnover, outside of three players who left early after being taken in the 2018 MLB Draft.

"They competed last year; they were fourth out of 10 teams," said Bischel, who on Tuesday was named MAC coach of the year. "I knew a lot of good things were there. I knew there was a lot of structure. What I didn't know was what kind of determination and what kind of motivation these guys had to really accomplish some big things."

That became evident quite early in the season, when there were a few hiccups, but no panic among the team.

The Chippewas have practically no weaknesses. The pitching is phenomenal, led by senior right-hander Pat Leatherman (Jenison) and junior right-hander Cameron Brown, who have combined to go 18-1 — Leatherman setting the program's career strikeout record along the way. He's at 284 and counting, breaking the record set by Josh Collmenter, who went on to a seven-year career in the major leagues.

Offensively, the team is sixth in the nation in runs, led by sophomore catcher Griffin Lockwood-Powell, sophomore shortstop Zavier Warren (Southfield) and senior outfielder Jacob Crum (St. Johns), who have combined for 189 RBIs. They're 1-2-3 in the conference in RBIs.

"It's kind of ridiculous the numbers they've put up together," Bischel said. 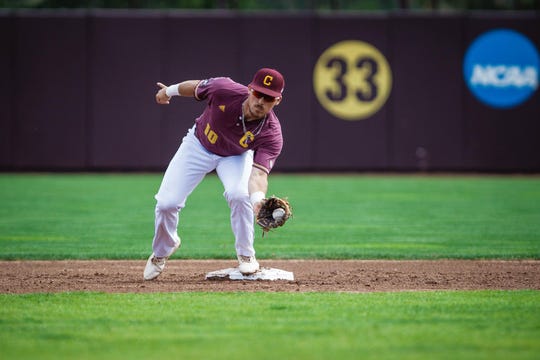 Individual records are nifty, but team accomplishments are the goal.

Central Michigan is seeking its first trip to the NCAA Tournament since 1995, and the Chippewas know there's only one way to get there. Despite the impressive record and winning streak, the RPI and strength of schedule aren't great — so it's going to take a MAC tournament championship to get into the postseason.

And that won't come easy. All those wins, and Central Michigan only won the regular-season title by a game over Ball State. That'll make this week a challenge.

"You know, those relief pitchers are a little bit goofy," Bischel said over the phone from Mount Pleasant during the week.

"But I hope they really enjoy it, too."

The Horizon League baseball tournament also opens Wednesday in Dayton, Ohio, with No. 5 seed Oakland (11-36) playing No. 4 Northern Kentucky (14-40) at noon. The winner advances to the double-elimination bracket; the loser is eliminated.