NBA veteran Derrick Rose recently agreed to sign with the Detroit Pistons, and before that, his nephew, Dwayne Rose Jr., committed to the University of Detroit Mercy. 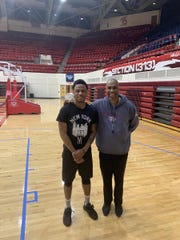 Detroit — Detroit is enjoying its recently delivery of Roses.

NBA veteran Derrick Rose recently agreed to sign with the Detroit Pistons, and before that, his nephew, Dwayne Rose Jr., committed to the University of Detroit Mercy.

"I appreciate those who stayed solid with me through the process," Dwayne Rose Jr. wrote on Twitter last month.

Rose played last season at Southwestern Illinois College, and the year before at the University of Toledo. A 6-foot-3 guard, he will be immediately eligible for the Titans, coached by second-year head man Mike Davis.

Detroit Mercy got another notable commitment this week in Brad Calipari, the son of Kentucky head coach John Calipari.

A 6-foot guard, Calipari also will be immediately eligible as a graduate transfer from Kentucky.

Both Calipari and Rose will have two seasons of eligibility remaining.

"It's always been a dream of mine to make a major impact on the court on the college level and I believe the best opportunity to do that is at the University of Detroit Mercy," Calipari said in a statement.

Rose and Calipari will join with rising sophomore Antoine Davis, who's coming off setting the freshman record for 3-pointers made in a season.

Still, times are a bit turbulent at Detroit Mercy, coming off an 11-20 season, plus word that it won't be eligible for the postseason this season because of poor APR scores.

Oakland this offseason lost point guard Braden Norris to Loyola-Chicago, and guard Jaevin Cumberland to Cincinnati, where he will team up with his sharp-shooting cousin — after Cumberland said in a post-season press release this spring that he was returning to Oakland. Guard Karmari Newman also entered the transfer portal last month, though his destination hasn't yet been announced.

Its biggest recruit is Tennessee freshman point guard C.J. Gettelfinger, who suffered a broken wrist that shut down his senior season.

The Golden Grizzlies were 16-17 last season, losing on a last-second shot to Northern Kentucky in the Horizon League tournament semifinals.

"She's a Hall-of-Famer," McCall said. "Twelve-hundred wins is an incredible feat. Pressure is a privilege. Is there some pressure? Yes because I want to make her proud."

McCall was head coach at Davenport from 2014-19. She led Davenport to two runner-up finishes in the GLIAC, and an NAIA World Series appearance in 2017.

The Titans are coming off their first NCAA Tournament appearance.

... Two former Central Michigan basketball stars are off to Europe, with Presley Hudson signed with a team in Poland after getting a brief look from the WNBA's Seattle Storm, and Reyna Frost off to play professionally in Italy.

... Detroit Mercy cross-country and track runner Ben Kendall, from Huntington Woods, won the Horizon League's Cecil N. Coleman Medal of Honor, handed out annually to a male and female athlete who best represent the conference both on and off the field, as well as in the classroom.