Wassink was sidelined with a broken collarbone in Week 8 of his sophomore season, then suffered an ankle injury in Week 9 last year.

Detroit — Western Michigan quarterback Jon Wassink wants to finally get the chance to suit up against Northern Illinois in November with a shot to win the Mid-American Conference West Division title and play in the conference championship game at Ford Field.

And for good reason. That would mean Wassink would be healthy and capable of taking the field, something that didn’t happen the last two seasons when the Broncos faced the Huskies toward the end of the regular season.

When Wassink is under center, Western Michigan has been successful with a 7-1 mark against MAC opponents.

Wassink was sidelined with a broken collarbone in Week 8 of his sophomore season, then suffered an ankle injury early in a Week 9 loss against Toledo last year.

Wassink completed 151 of 245 passes for 1,994 yards and 16 touchdowns with six interceptions last season. The year before that, he completed 124 of 193 passes for 1,391 yards and 14 TDs with four picks his sophomore season after replacing Zach Terrell, who led the Broncos to the MAC championship in 2016.

“I really do feel healthy and I’m definitely ready to go for fall camp,” Wassink said at MAC media day Tuesday at Ford Field. “I’m really excited about the year and I’m very thankful to be feeling good and healthy, especially the last two years being injured.

“I’m very confident on the field, and a lot of that comes from the players around me and the coaches around me. Coach (Tim) Lester gives me a lot of freedom and he has confidence in me so that helps. A lot of players around me make my job easier, so I’m definitely very comfortable out there and confident.”

When asked what he felt his strength was, Wassink replied: “I would say the mental aspect of the game, especially at quarterback you can never let pass plays affect how you’re doing in a game. You always have to bounce back quickly. And also understanding what coach is thinking, just being a good decision-maker is important.”

Western Michigan (7-6, 5-3 MAC) rallied from behind to win on the road at Miami (40-39) and Bowling Green (42-35) last year with Wassink at the controls. He enjoys the fact the Broncos were able to earn the comeback victories, but would like them to jump on their opponents early to avoid digging out of holes.

“We always have the mindset of if we get down we’re not going to panic, we’re just going to attack each play and slowly get back in the game and win,” Wassink said. “Our whole team has that mentality of being able to get out of some holes, but a lot of what we’ve been working on too is doing our best to not get in those situations where we have to come back. That’s definitely been a focus for the offseason.”

The Broncos should once again have a balanced attack with senior running back LeVante Bellamy getting the bulk of the carries after rushing for 1,228 yards and six touchdowns to earn first team All-MAC honors. 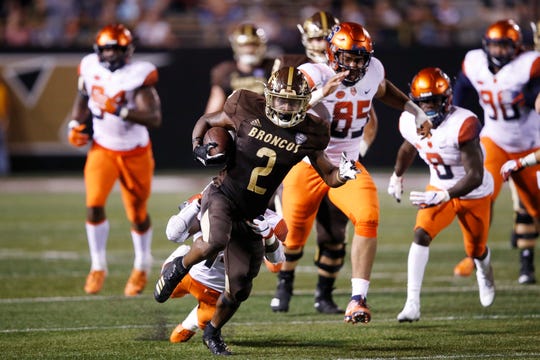 Bellamy is a burner with 4.28 40-yard dash speed and should be able to burst through holes opened by veteran offensive linemen in senior Luke Juriga, a first team All-MAC guard who will move to center, junior left guard Mike Caliendo and junior left tackle Jaylon Moore.

“The running game and the passing game always works together, and the defense will have to respect Bellamy running the ball so that will help the receivers get open more,” Wassink said.

The Broncos will be hurt by the loss of receiver Jayden Reed, who had 56 receptions for 797 yards and eight TDs as a true freshman before transferring to Michigan State.

Western Michigan also showcases senior tight end Giovanni Ricci (6-4, 245), a third team All-MAC performer who was a holdover from the MAC championship team when he recovered a fumble in the title game win over Ohio.

“He’s kind of like a tight end, receiver who is split out a decent amount of time,” Wassink said of Ricci. “He’s a great weapon to have. He’s like 6-5 and pretty thick. He can go up and catch the ball against defenders and across the middle. It’s a great, awesome thing to have as a quarterback, someone you know who can make plays and go up and grab the ball.”

Wassink feels the Broncos can overcome the loss of Reed.

“We definitely have a lot of young talent at wide receiver," Wassink said. “Jalen will definitely be a weapon for us. He’s tall, 6-4. Dashon Bussell redshirted last year and he’s a very good weapon, very fast, and then we have some other true freshmen who will contribute.

“I worked a little bit with Cameron. He’s very football savvy. He knows how to run routes and get open. I haven’t worked a ton with him, but he’s very athletic. He can go up and get the ball. He’s pretty thick too so he’s not going to have trouble physically, which is a big help.”

Most of all, Wassink is looking forward to playing against Northern Illinois and playing in a bowl game. The Broncos suffered a 42-41 loss at Ball State on Nov. 13 that cost them a shot at the MAC West title. They went on to defeat Northern Illinois, 28-21, in the regular-season finale before falling, 49-18, to BYU in the Famous Idaho Potato Bowl.

“Lord willing I’ll be out there the whole year, but it’s football and injuries happen so there’s no for sures,” Wassink said. “It definitely stinks not being out there, not being able to play in those crucial games the last two years. But you try to keep it in perspective and realize it’s an awesome privilege to be able to play.”