These games that should grab your attention in the opening week of college football. 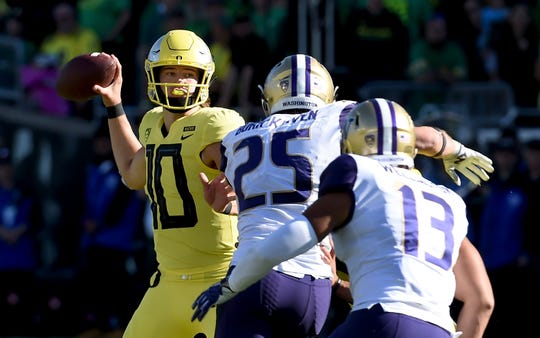 You did it, football fans.

Thursday night’s Hall of Fame Game marked the unofficially official return of the National Football League, and with the calendar now reading August, college training camps are in full swing across the nation.

Now all that’s left to do is wait for something meaningful.

Unless you’re acutely tuned into the prep circuit, that likely means the opening week of college football. While a majority of Power Five teams will use their opening contests as tune-ups, handily defeating overmatched squads at home, for fans whose interest ranges nationally, there are a decent handful of games that’ll be worth tuning into.

One of those games is in just three weeks.

Let’s take a look at that, plus four other intriguing matchups from Week 1 of the college football season.

Auburn is no stranger to playing neutral-site games on opening weekend. Last year, the No. 9 Tigers defeated sixth-ranked Washington 21-16 in the Chick-Fil-A Kickoff in Atlanta.

It wasn’t quite the leaping-off point Auburn had hoped, though, and what looked to be a statement win wound up a footnote in an 8-5 season. Whether it be Joey Gatewood or Bo Nix, the Tigers will be featuring a new man under center heading into the 2019-20 season — and that’s not necessarily a bad thing. With Jarrett Stidham, the Tigers finished with just the conference’s ninth-ranked passing game.

Auburn also returns a majority of its defensive front, which’ll figure to make life difficult for preseason Heisman hopeful Justin Herbert. The Oregon quarterback came back for his senior year to lead the Ducks to new heights, and despite losing Minnesota Vikings draft pick Dillon Mitchell, certainly has the weapons to work with in Jaylon Redd, tight end Jacob Breeland and Penn State transfer Juwan Johnson.

There are a lot of things that make this matchup interesting, and it starts with the unknown. Can first-year head coach Manny Diaz get Miami back on track? Will second-year Florida coach Dan Mullens advance the progress of a program who improved by six wins a season ago?

The last time we saw the Gators, they were mopping the floor with Michigan’s depleted defense in a 41-15 Peach Bowl victory. Florida’s offense is loaded with weapons in the backfield and out wide, making Feleipe Franks the make-or-break player on a team looking to contend for a conference title.

Miami’s offense suffered from poor quarterback play a year ago, making the transfer of Ohio State quarterback Tate Martell a huge offseason win for the Hurricanes, though he’s yet to be named the starting quarterback. Add in the organic intrigue of a rivalry game between teams that haven’t met since 2013 (a 21-16 Miami win), and you pretty much have the highest stakes one could ask for out of a Week 1 non-conference matchup between teams that appear to be headed in different directions a season ago.

The Wildcats in 2018 reached the B10 Championship game, and after seeing what the team has in Clemson quarterback transfer Hunter Johnson, we’ll have a better idea of just how capable this team is of competing for another West title. 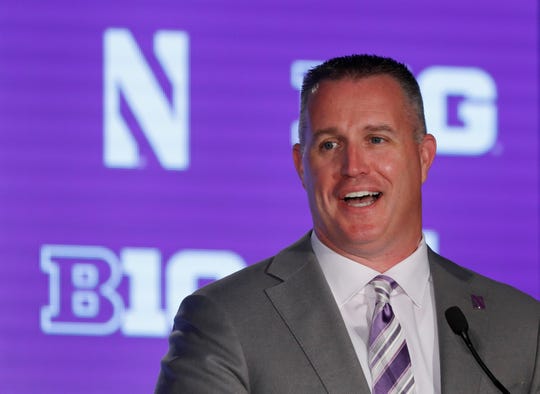 That said, No. 25 seems like an appropriate preseason ranking for Northwestern. There are still major question marks at running back, and even with the addition of Johnson, Northwestern’s passing game was a glaring deficiency last season. Its defense returns nine starters, however, and if Northwestern’s offense is merely capable of putting points on the board, it’d be no surprise to see Fitzgerald and Co. return to Indianapolis once again.

Stanford quarterback KJ Costello will be the marquee name to watch in Cardinal red. The 6-5 senior took a major step forward last year in his first full year under the gun, leading the PAC 12’s most efficient passing offense with 3,540 yards and 29 touchdowns on 65.1-percent passing.

More: Wojo: Michigan's defense is refueled, but is it reloaded?

With Trevor Lawrence and Tua Tagovoiloa penciled in firmly atop the list, Alabama transfer Jalen Hurts faces an uphill battle as a Heisman contender. Still, he’s in a pretty good place to beat the odds. Oklahoma quarterbacks — Baker Mayfield and Kyler Murray — have grabbed the last two Heisman trophies and No. 1 overall picks in the NFL Draft, and the dynamic Hurts, who led Alabama to national title games as a freshman and sophomore, seems poised to be another electrifying difference-maker in Lincoln Riley’s offense.

Meanwhile, for Houston, Week 1 marks the official start of the Dana Holgorsen era. Holgorsen never quite reached the expectations he set while winning a share of the Big East title in his first year as head coach at West Virigina, winning 10 games just one other time in his seven-year tenure. His pass-heavy offense should suit be a perfect fit for the Cougars’ loaded receiving corps, which will also benefit from a healthy D’Eriq King. Despite missing more than two-and-a-half games with a knee injury, the senior quarterback in 2018 set The America’s All-Purpose touchdown record with 50.

Boise State enters the season just outside the top-25 bubble. And after losing four-year starting quarterback Brett Rypien and 1,400-yard rusher Alexander Mattison, the Broncos have some things to prove before moving back into the conversation as a team outside a Power Five conference looking to make some noise.

But hey, adaptation is the name of Boise State’s game. The quarterback competition likely won’t be settled until closer to opening week, but if nothing else, rely on the Bronco defense, which returns seven starters from a year ago, to serve as the foundation of a transition year and provide a pop in this season-opening showdown.

Perhaps the bigger national story here, though, is how Willie Taggart’s Florida State team opens in his second season as head coach. His first was a disaster; the team finished with a losing record for the first time 1976 and broke a 37-year bowl streak — the Seminoles’ dismal campaign did provide us with an all-time meme-able moment, though, when a shirtless Florida State fan was captured by TV cameras reading a book during a 52-3 loss to Clemson.