Wayne State head coach Paul Winters talks about the strength of the GLIAC, and what the Warriors must to to climb in the standings. The Detroit News

Detroit — Wayne State football coach Paul Winters hadn’t experienced a season like 2018’s 2-9 campaign since his first season in 2004 when the rookie head coach got his feet wet at Wayne State with a 1-9 mark.

Winters isn’t shy about the team falling short of expectations, describing his 2018 team Monday as struggling quite a bit at the Great Lakes Intercollegiate Athletic Conference's media day. 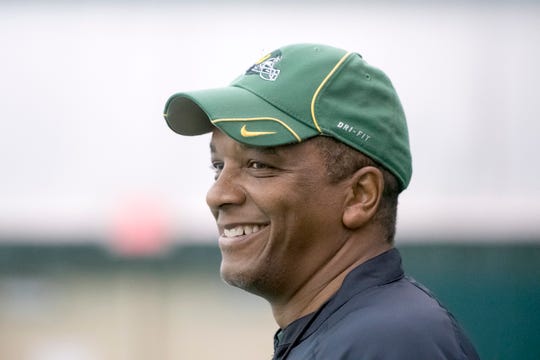 In order to get back to respectability in the GLIAC, Winters said his team will have to embrace the grindstone, highlighting work ethic as the key to engineering a turnaround.

“The GLIAC is the SEC of Division II,” Winters said. “Every week it’s a great challenge. Our guys are all upset with the results of last season. We’ve got guys that are anxious to show that that’s (last season’s record) not us.”

Last season’s low win total brought Winters’s career record at Wayne State under .500, but if anyone knows how to steer Wayne State football to the national stage, it’s probably Winters. His 2011 squad was the Division II national runner-up and Wayne State had winning seasons from 2008 to 2012. Plus, Winters has put players into the NFL, including Joique Bell. Anthony Pittman, a linebacker last season, is vying for a spot with the Lions.

“We see them all the time,” Winters said about Wayne State’s NFL successes. “They’re very interested in us being successful.”

Other than a renewed work ethic there are reasons for hope around Wayne State’s program. Monday’s unveiling of the GLIAC Preseason Coaches Poll had Wayne State tied for fifth, and Wayne State returns redshirt senior running back James Hill from Livonia Clarenceville. Hill led the GLIAC in yards per carry (6.4) and finished fourth in rushing yards (831) in 2018.

“We’re just trying to create a new culture,” Hill said. “We need a new mentality. In the past it’s been individual mindsets. If we have one mindset (as a team) that we’re trying to come after everybody else’s throne, that will get us over the hump this year. (Anthony) Pittman showed me the ropes throughout the offseason about what I should be expecting going into the season.”

Wayne State will be led on defense by redshirt senior safety Kyle Toth.

“We need more confidence,” Toth said. “A couple more three-and-outs on defense can make a big difference. We missed plays last year that we should have made. We’ve got the skill. Our (defensive backs) are a very tight-knit group.”

At one time committed to play football at Michigan State, Campbell ended up spending time in jail, once for an altercation with a security guard in Cass Tech, then another involving an incident with his girlfriend. After helping Garden City (Kansas) Community College win a national title, Campbell transferred to Ferris State and last season won the Harlon Hill award, Division II’s answer to the Heisman Trophy while guiding Ferris State to the Division II national title game.

“The system is such that he was just learning the system as time progressed (last season),” Annese said. “As the season wore on he started to get more productive offensively. Some of the things he was doing at the end of last year were tough for him in the beginning of the year.”

Grand Valley trying not to look too far ahead

Grand Valley football claims the 2002, 2003, 2005 and 2006 Division II national titles, but lately it’s been Ferris State controlling the GLIAC and getting national accolades.

Ferris State has beaten Grand Valley the past two seasons to claim the Anchor-Bone Trophy to go along with the deep playoff runs that Grand Valley had been accustomed to.

Grand Valley coach Matt Mitchell is entering his 10th season at the helm but hasn’t won the GLIAC since 2016.

Grand Valley is ranked third in the GLIAC preseason coaches poll, looking up at Ferris State, but Mitchell is trying to focus on the present.

“We’re not really focused on that (Ferris State) right now,” Mitchell said. “I’m more concerned about having a new starting quarterback. I’ve always felt that if you look too far ahead you’re going to stumble.”