Tagovailoa has been studying men from the Bible, including Joseph, Moses and David, and believes he can draw from their successes and failures. 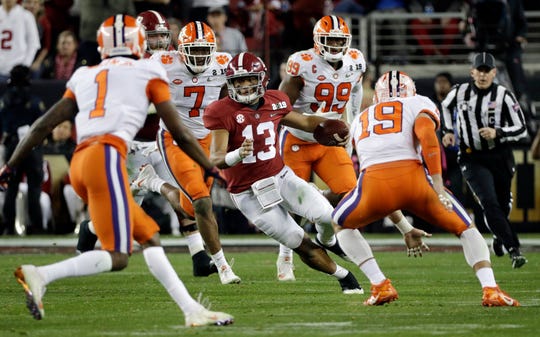 Tuscaloosa, Ala. — Tua Tagovailoa has been studying men from the Bible, including Joseph, Moses and David.

The Alabama quarterback believes he can draw from their successes and failures and the fact that they each had some of both. Tagovailoa can relate to their experiences after an almost too-good-to-be-true start to his college career.

Then came his very public run-in with failure in January’s national title matchup against Clemson, when Tagovailoa threw an early pick-six and was outplayed by Tigers freshman Trevor Lawrence. The topics of his Bible studies with little brother and fellow Crimson Tide quarterback, Taulia, and team chaplain Scotty Hollins give a glimpse of how Tagovailoa views that experience.

For him, it’s something to grow from.

“It’s almost like a ‘Facing the Giants’ type thing, guys who have been successful within the Bible,” Tagovailoa said in an interview shortly before one of his regular lunches with Hollins and Taulia. “But with them being successful, they had to go through all these trials. And some of them were successful at an early age then they went through trials and were humbled and then became successful (again). And some were just failures and then they became a success.

“It’s just awesome how it can relate to something like football.”

The parallel for Alabama and its star quarterback started early with Tagovailoa and the Tide rolling through the 2018 regular season looking virtually unstoppable and racking up such huge numbers that he scarcely had to play in the fourth quarters.

Then things stopped going so smoothly. Tagovailoa struggled in the Southeastern Conference championship game after injuring his left ankle early and later exited after the right one got hurt, too.

Tagovailoa, who led the nation in passing efficiency, will again be among the Heisman favorites going into this season when Alabama opens Aug. 31 against Duke in Atlanta.

His debut season as starter — after coming off the bench to lead a rally in the national title game against Georgia as a freshman — would be hard to improve on. Except, of course, for the ending.

Hard but not impossible.

“I think Tua is the kind of guy that’s never really satisfied,” Alabama coach Nick Saban said. “And I think he had an outstanding year last year. Are there things that he can improve on? I don’t think there’s any question about that.”

One offseason emphasis has been to better know when to settle for the safe play instead of trying to force a big one. Another focus has been shedding the weight Tagovailoa gained while recovering from the late-season injury. He cut out starches and sweets and drinks mainly water. His Dad, Galu, helped enforce the healthy habits over the summer with his sons.

The 6-foot-1, 215-pound Tagovailoa believes he’s in significantly better shape this season. He bought an Apple Watch to keep track of his steps, racking up a personal high of 28,000-plus.

There was no raiding the fridge or snack-hunting trips at night when at home.

“My Dad makes us diet,” he said. “We can’t really drive a car to go eat late at night or what-not. The nearest gas station is pretty far from us, too, so we can’t get any snacks. The kitchen is right where they’re sleeping.”

Tagovailoa set Alabama single-season records with 3,966 passing yards and 43 touchdowns while leading the nation’s No. 3 scoring offense. With then-offensive coordinator Mike Locksley and a dangerous group of receivers led by Biletnikoff Award winner Jerry Jeudy, Tagovailoa turned Alabama’s offense into a passing and scoring machine. It was anything but the typical Tide offense.

Tagovailoa only threw six interceptions, but four of them came in the national and SEC title games. Tagovailoa knows that some fans — especially of opposing teams — are going to judge him by that finale.

“I think anyone, even the guys who are in the NFL, can say this: You’re only as good as your last play,” Tagovailoa said. “And I definitely think that every single day, you’ve got to go out there and you’ve got to prove yourself. It doesn’t matter if you had success on one game or 14 games. If you don’t have success in one game, I mean you’re only as good as your last game.

“People don’t see the 14 games, they only see that last game.”

Tagovailoa is hoping for a happier ending this time.

Wisconsin wide receiver Quintez Cephus was declared eligible to play, a year after he was suspended in the fallout from a sexual assault allegation that resulted in his acquittal by a jury at trial.

Cephus was suspended from the team in August 2018 after he was charged with second- and third-degree sexual assault. Prosecutors filed the counts after two women accused him of sexually assaulting both of them in his apartment that April when they were too drunk to consent. Cephus maintained the sex was consensual and one of his accusers arranged the encounter.

A jury acquitted Cephus of the charges earlier this month and Chancellor Rebecca Blank allowed him to return to school. The athletic department said he wasn’t eligible to play in games but didn’t elaborate. Wisconsin football spokesman Brian Lucas said that Cephus was ineligible because he did not fulfill the NCAA’s credit requirements in the spring semester.

The NCAA granted a waiver restoring his eligibility for the 19th-ranked Badgers, who open the season Aug. 30 at South Florida.

Cephus returned to practice on Wednesday. Coach Paul Chryst said then that Cephus didn’t get a “ton of reps” but it as “great having him out here.”

Sean Clifford will start at quarterback for No. 15 Penn State in its season opener against Idaho.

... The NCAA granted immediately eligibility to West Virginia wide receiver Sean Ryan, who transferred from Temple in May.