Glass accounted for four TDs as Eastern Michigan took the lead in the second half and opened the season with a 30-23 victory. 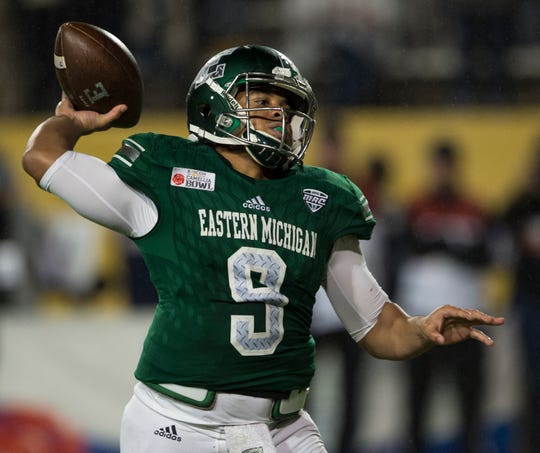 Conway, S.C. — Mike Glass III accounted for four touchdowns as Eastern Michigan took the lead in the second half and opened the season with a 30-23 victory over Coastal Carolina in the first meeting between the teams on Saturday afternoon.

Glass, who was a perfect 11-for-11 passing in the first half for 82 yards, hit Dylan Drummond on an 11-yard scoring strike to close to 10-7 with 11:30 remaining in the second quarter. Coastal Carolina’s Massimo Biscardi added a 53-yard field goal, which tied a school record for longest kick, in the final second of the first half for a 13-7 advantage.

Eastern Michigan opened the second half by scoring on its first three possessions to take a 23-13 lead after Glass hit Drummond from 19 yards out with 5:53 remaining in the third.

Fred Payton threw for 304 yards and two touchdowns for the Chanticleers but was intercepted four times. Clay Holford, Brody Hoying, Blake Bogan and Kevin McGill had an interception apiece for Eastern Michigan.

Wassink, who threw for 368 yards with no interceptions, was 11-of-15 for 226 yards and three scores in the first half. This was his third game with over 300 yards passing. DaShon Bussell had three catches for 100 yards after two quarters, finishing with 116 yards receiving. Giovanni Ricci had five receptions for 97 yards and two TDs in this first meeting between the teams.

The Broncos struck early and often, claiming a 21-0 lead after one quarter and going up 31-7 at the break. Thiago Kapps added two field goals to go with his six extra-point kicks to total 12 points.

Monmouth’s Pete Guerriero carried 23 times for 107 yards and a touchdown. Kenji Bahar was 26-of-41 passing for 194 yards and a score.