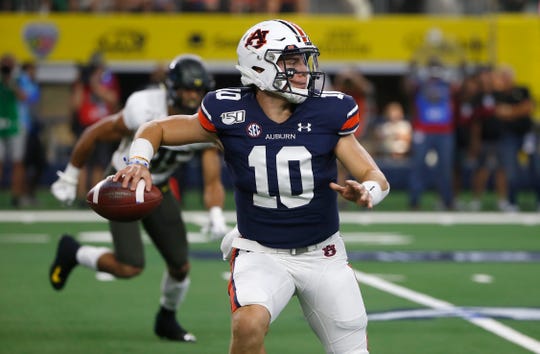 Arlington, Texas — Bo always knows at Auburn, even a true freshman quarterback by that name.

After barely converting a fourth down with a gutsy run in the final minute, Bo Nix threw a 26-yard touchdown pass to Seth Williams with 9 seconds remaining as the 16th-ranked Tigers rallied for a 27-21 win over No. 11 Oregon on Saturday night.

“He has some savviness to him, there’s no doubt,” coach Gus Malzahn said of the young quarterback. “When the game is on the line, you’ve got to make plays, and that’s the one thing he showed.”

On fourth-and-3, Nix rolled to the right, then tucked and pushed forward. Only the nose of the ball, sitting at midfield, was past the chain when officials measured for a first down.

“Play of the game,” Malzahn said.

And Nix wasn’t done. On third-and-10 from the Oregon 39 and no timeouts, he hit Williams for 13 yards. The receiver got out of bounds with 16 seconds left, with Tigers already in field goal range. But the play-calling head coach wanted to give Williams the chance to make another play — and Nix delivered to put Auburn ahead for the first time.

The Tigers, who trailed 21-6 late in the third quarter, delivered another early blow to the Pac-12. They beat the Pac-12’s highest-ranked team in a season opener for the second year in a row — No. 6 Washington lost to them, 21-16, in Atlanta last year.

Nix finished 13-of-31 passing, four of those completions on Auburn’s final drive, for 177 yards with two touchdowns and two interceptions. He also ran seven times for 42 yards, while Whitlow had 110 yards rushing on 24 carries.

Justin Herbert, who bypassed early entry in the NFL draft to return to Oregon, was 28-of-37 passing for 242 yards with a touchdown. He was under pressure when he threw across the field and hit Spencer Webb on a 20-yard score that made it 14-3 late in the first quarter.

Herbert wasn’t on the field for a fourth-and-1 play with 5½ minutes left, after banging his knee with a defender following a pass. After Herbert was tended to and came off the field, the Ducks called two timeouts — though those stoppages didn’t allow Herbert to return at that point.

“The wrong personnel was in, and we got personnel straightened out, they weren’t quite sure as to who was going to do what,” Cristobal said. “As a coaching staff, that’s on us. … Trying to make pieces work for a certain play.”

But it didn’t work when CJ Verdell, who had a 1-yard TD run on the opening drive of the game, was stuffed for a 1-yard loss.

Auburn went three-and-out, but after Oregon got a quick first down, Herbert was sacked and the Ducks punted with just over 2 minutes left.

Nix threw an 11-yard TD pass to Eli Stove late in the third quarter. When the Tigers got to the 1 with just under 10 minutes left, Joey Gatewood — the redshirt freshman Nix beat for the starting job — came in, leaped from the 3 and over the line with the ball extended to make it 21-20 since Auburn kicked the extra point instead of trying for two.

“We brought back a play we used to run in 2010 with Cam (Newton),” said Malzahn, the offensive coordinator of that team that beat Oregon in the BCS championship game. “He looked pretty good going over the top with it.”

No. 2 Alabama 42, Duke 3: Tua Tagovailoa threw for 336 yards and four touchdowns as Alabama overcame a sluggish start to blow out Duke in the Chick-fil-A Kickoff Game.

Returning to the stadium where they won the Southeastern Conference title last December and the national championship two seasons ago, the Crimson Tide (1-0) was held scoreless in the first quarter — which happened only one time in 2018.

But the Blue Devils (0-1) merely delayed the inevitable.

Tagovailoa put his tight ends to good use. The left-hander hooked up with Miller Forristall on a 27-yard touchdown pass and then went to Major Tennison for a 1-yard score

Alabama’s dynamic receiving corps also got in on the fun. DeVonta Smith hauled in an 8-yard TD pass and Jerry Jeudy broke loose for a 21-yard score.

Jerome Ford and Brian Robinson Jr. ran for the Tide’s other TDs.

No. 3 Georgia 30, (at) Vanderbilt 6: Jake Fromm threw for 156 yards and a touchdown, and the Bulldogs won their 20th opener in 23 seasons and stayed perfect to kick off coach Kirby Smart’s fourth season. They also easily won their 14th straight against the Southeastern Conference’s Eastern Division in their first league game to open a season since 1995.

D’Andre Swift ran 16 times for 149 yards, and Brian Herrien added 65 and a TD run as the Bulldogs rolled up 326 yards rushing. Georgia finished with a 481-225 edge in total offense, and the Bulldogs also had two sacks and recovered a fumble.

Neal finished 15 of 25 for 85 yards before being replaced by Deuce Wallace for the final possession. Vaughn was held to 74 yards on 15 carries.

Vanderbilt managed only a pair of field goals by Ryley Guay of 26 and 46 yards. 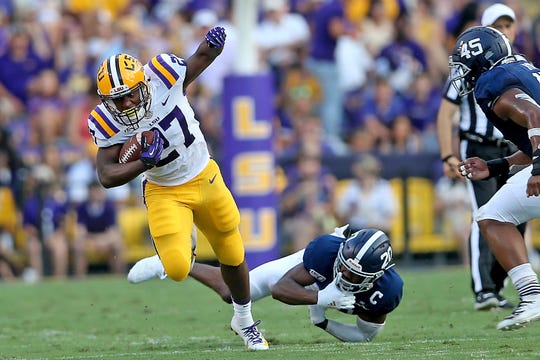 (At) No. 6 LSU 55, Georgia Southern 3: Joe Burrow tied an LSU single-game record with five touchdown passes before halftime and the Tigers cruised to a win.

The Tigers (1-0) scored 21 points in the first quarter — something they never did in any quarter last season. Their point total was the most in a non-overtime game since scoring 63 against New Mexico State in 2014.

Burrow completed 23 of 27 passes for 278 yards without an interception before being subbed out after LSU’s first possession of the second half, which ended with a field goal. That drive marked Burrow’s last chance to break the LSU mark of five touchdowns in a game set by Zach Mettenberger in 2013.

LSU threw 39 times and ran 33, with more rushes coming in the second half as the Tigers ran down the clock. Ed Orgeron has said throughout August that he finally has the offense he wanted. Designed largely by new passing-game coordinator Joe Brady and overseen by incumbent offensive coordinator Steve Ensminger, the up-tempo, no-huddle scheme routinely features five receiving targets on a given play, some of whom give Burrow the option to unload the ball quickly if under pressure.

Georgia Southern (0-1), which won 10 games last season, was confronted with an LSU defense well prepared to stop its triple-option.

(At) No. 10 Texas 45, Louisiana Tech 14: Sam Ehlinger threw four touchdown passes and Texas rolled past Louisiana Tech to give coach Tom Herman his first season-opening victory in three years with the Longhorns.

Ehlinger was coolly efficient from the start with scoring passes on three of Texas’ first four possessions.

Devin Duvernay caught nine passes and Ehlinger’s first touchdown, and Brennan Eagles caught touchdowns of 28 and 25 yards in the second and third quarters.

Texas is one of the favorites to challenge Oklahoma for the Big 12 title as long as Ehlinger can keep delivering touchdowns like he did last season and Saturday night. The junior passed for 25 TDs and ran for 16 more last season, and his four scoring thrown against the Bulldogs tied his career high. Ehlinger left the game at 38-0 and did not play in the fourth quarter.

(At) No. 13 Washington 47, Eastern Washington 14: Jacob Eason threw for 349 yards and four touchdowns in his first game in nearly two years in his Washington debut.

Taking his first snaps since the 2017 season when he lost the starting job at Georgia to Jake Fromm, Eason showed no rust, carving up one of the top FCS programs in the country. Eason completed 27 of 36 passes and led Washington (1-0) on touchdown drives on four of its first five possessions.

Eason’s fourth pass in purple was a 50-yard touchdown strike to Andre Baccellia. Eason added a 7-yard TD pass to Aaron Fuller, who made a stunning one-handed catch while getting a foot inbound, and capped his first-half with a 10-yard TD strike to Chico McClatcher late in the first half.

Eastern Washington (0-1) quarterback Eric Barriere was 21 of 35 for 211 yards, but was sacked four times. 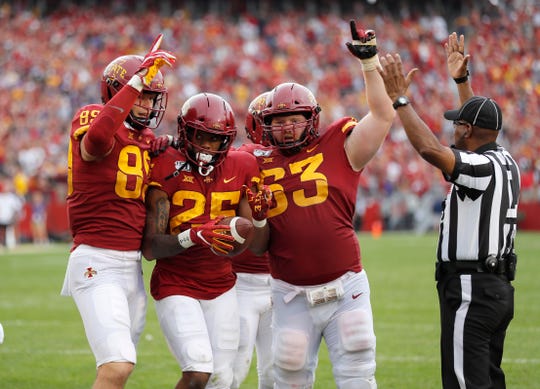 La’Michael Pettway had a pair of touchdown catches for the Cyclones (1-0), who barely survived the season’s first major upset after entering the year ranked for the first time since 1978.

Croney fumbled near the goal line on the second-to-last play of the game. But quarterback Brock Purdy sprinted from the backfield to recover it at the 1 and set up the game-winning plunge.

After the teams traded field goals in the first overtime, Purdy found Pettway — a graduate transfer from Arkansas in his Iowa State debut — in the back of the end zone. But Northern Iowa pulled even at 23-all after freshman Will McElvain scrambled long enough to free up Trevor Allen for a 7-yard TD catch.

Iowa State forced Northern Iowa into a field goal to start triple overtime, and Purdy completed three straight passes before pulling off what might end up being remembered as a season-saving recovery.

More: Freeze coaches from hospital bed in loss to No. 22 Orange

No. 22 Syracuse 24, Liberty 0: Abdul Adams, Jarveon Howard and Moe Neal ran for touchdowns and  Syracuse spoiled a most unusual debut for Hugh Freeze as Liberty’s coach.

Still recovering from back surgery for a herniated disk on Aug. 16 and a staph infection, Freeze coached from a hospital bed in the coaching box. He couldn’t have liked much of what he saw.

Stephen Calvert threw two interceptions, as many as Freeze had said the fourth-year starter had thrown in all of fall camp, and was sacked eight times by a defense that returned players responsible for 34 sacks last season, the most in the football subdivision.

With quarterback Tommy DeVito taking over the Syracuse offense, the Orange led just 10-0 at halftime thanks to Andre Szmyt’s 45-yard field goal and Adams’ 2-yard run. An interception by Andre Cisco in the third quarter set Syracuse up at the Flames’ 37 and Howard capped a five-play drive with a 1-yard run. Neal’s 42-yard burst capped the scoring in the final quarter.

Gordon made his first college start memorable throwing touchdowns of 41, 48, 19 and 54 yards in the first half as the Cougars (1-0) built a 35-7 lead and coasted to an easy opening victory. Gordon finished 29 of 35 for 420 yards and five TD passes before checking out late in the third quarter.

Max Borghi added 128 yards rushing on 10 carries, including a 12-yard touchdown. Borghi became the first Washington State running back to rush for 100 yards since Gerard Wicks against California in 2016.

The Aggies (0-1) were limited to 317 total yards, a big chunk coming in the fourth quarter.

New Mexico State quarterback Josh Adkins was 28 of 42 for 221 yards and two interceptions, and scored on a 3-yard run in the first quarter when he recovered a fumble and took the loose ball into the end zone to tie the score at 7.