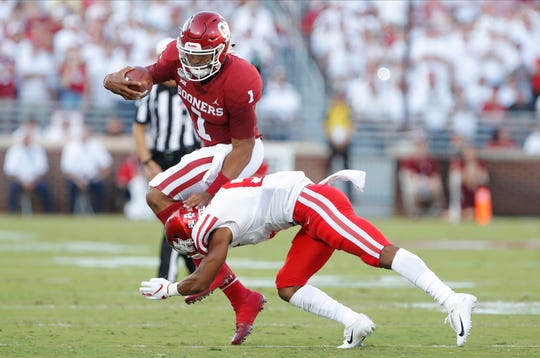 Oklahoma quarterback Jalen Hurts (1) leaps over Houston cornerback Damarion Williams (6) during the first half Sunday. Hurts, a transfer from Alabama, threw for three touchdowns and in for three scores in the Sooners' 49-31 victory. (Photo: Alonzo Adams, AP)

It was Hurts’ first game for Oklahoma since he transferred from Alabama. He put on a show as his predecessor, 2018 Heisman Trophy winner Kyler Murray, watched. He posted 508 total yards, the fifth-most in school history.

It wasn’t enough for him.

Charleston Rambo caught three passes for 105 yards and a touchdown and Trey Sermon ran for 91 yards for Oklahoma.

Oklahoma’s defense was sharp too, constantly pressuring Houston quarterback D’Eriq King and limiting him to 87 yards passing in the first half. King, one of the nation’s top quarterbacks last season, finished with just 167 yards passing in former West Virginia coach Dana Holgorsen’s debut for the Cougars.

“I thought our defense flew around, was extremely active, extremely disruptive for the majority of the game,” Riley said.

Southern California quarterback J.T. Daniels will miss the rest of the season after tearing a ligament and the meniscus in his right knee during the Trojans’ opener.

Coach Clay Helton confirmed the severity of his sophomore starter’s injury. USC (1-0) plans to start freshman quarterback Kedon Slovis against Stanford (1-0) at the Coliseum on Saturday.

Daniels will redshirt this season, Helton said. With an estimated nine to 12 months of recovery from surgery, Daniels could be ready for camp next year.

“He will be missed, but we will have to move forward, and we wish him nothing but the best,” Helton said. “We know he’s going to be back.”

Daniels was hurt when his leg twisted while he was being tackled on a blitz with 27 seconds left in the first half of USC’s 31-23 victory over Fresno State. Daniels started 11 games last season for USC’s first losing team since 2000, and he won a four-way competition for the starting job last month in camp.

Clemson coach Dabo Swinney said there was a chance injured starting receiver Amari Rodgers could play Saturday when the top-ranked Tigers take on No. 12 Texas A&M.

Rodgers is a 5-foot-10, 210-pound junior from Knoxville, Tennessee, who tore his ACL during spring practice. Rodgers had an operation and was expected to miss much of the season as he recovered.

But Swinney said Rodgers is “well ahead of schedule” in his recovery and could see the field against the Aggies this week.

Rodgers, the son former Tennessee national championship quarterback Tee Martin, had 55 catches for 575 yards and four touchdowns last season. Rodgers went through pregame warmups with the Tigers before their 52-14 win over Georgia Tech, but did not play.