Penn State took down Purdue’s Jack Plummer 10 times, seven in the first half, and finished with its highest number of sacks since 1999 and one shy of the school record. 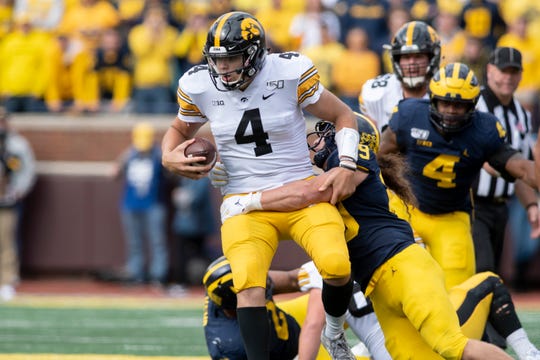 Big Ten defenses turned in three of the season’s top five sack totals over the weekend, with Penn State leading the way with 10 against Purdue.

Wisconsin had nine against Kent State and Michigan had eight against Iowa.

Penn State took down Purdue’s Jack Plummer 10 times, seven in the first half, and finished with its highest number of sacks since 1999 and one shy of the school record.

Defensive ends Toney Shaka (3) and Yetur Gross-Matos (2) combined for half of Penn State’s sacks. Eight players had a hand in at least one.

More: This week's football on TV

“I didn’t even know we had 10 sacks until we got into the locker room,” linebacker Jesse Luketa said. “I’m not surprised, though. We call them the ‘Wild Dogs’ for a reason. We let them loose and it was time to hunt. I’m excited for them. A couple weeks ago there was talk about how our front four weren’t as productive as what we wanted, and today they took that to heart and went out and executed.”

Purdue had minus-19 rushing yards, the fewest against Penn State since 1978 and fifth-fewest since 1947.

Wisconsin’s nine sacks were its most since at least 1995. The Badgers have 21 sacks, two more than last season’s total.

Michigan’s eight sacks came against an Iowa team that had allowed just six in its first four games. Kwity Paye led the Wolverines with 2.5.

Ohio State is the national team leader in sacks. The Buckeyes had four against Michigan State and have 28 for the season.

But Taggart also said Monday that there is a game plan for using Alex Hornibrook, who guided the Seminoles to wins over Louisville and North Carolina State after Blackman suffered an injury.

Taggart says both quarterbacks understand the offense. The coach says his staff really likes “what they both have done for us, and hoping they continue to do a great job for us.”

Taggart says that Blackman has practiced consistently during the bye week. He suffered a knee injury in the third quarter of Florida State’s win over Louisville on Sept. 21.

... Kyle Trask is “good to go,” coach Dan Mullen said Monday, two days after UF’s quarterback sustained a slight sprain of the MCL in his left knee against Auburn.

Trask arrived Monday wearing a compression and heavy knee brace on his leg, but he said he would be fine for the SEC showdown featuring two top-10 teams.

... Baylor starting quarterback Charlie Brewer has been cleared to practice and play for the No. 22 Bears, who will be without starting left tackle Connor Galvin.

Coach Matt Rhule said Monday that Brewer is fine after taking a hard hit early in the fourth quarter of Baylor’s 31-12 win at Kansas State on Saturday. But Galvin will miss 4-6 weeks because of an unspecified lower body injury he suffered early in the first quarter.

... Nebraska began preparing for this week’s game at unbeaten Minnesota as if sophomore Noah Vedral would start at quarterback in place of Adrian Martinez.

Martinez limped to the sideline at the end of the third quarter of the Cornhuskers’ win against Northwestern on Saturday.

Coach Scott Frost, as per his policy, did not disclose Martinez’s injury. If Vedral starts, freshman Luke McCaffrey would be the backup.