The Terrapins (3-3, 1-2 Big Ten) opened with a shutout of Howard and entered the Purdue game coming off a 48-7 rout of Rutgers. But Maryland also gave up 59 points to Penn State and stumbled mightily against Purdue. 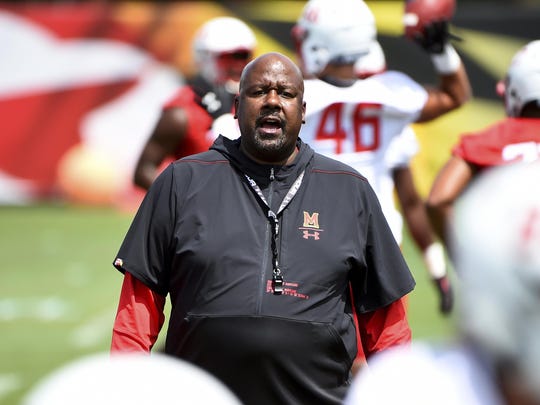 The erratic play of Maryland’s defense has proven to be more of a problem for first-year coach Mike Locksley than losing his starting quarterback to injury. (Photo: Will Newto)

College Park, Md. — The erratic play of Maryland’s defense has proven to be more of a problem for first-year coach Mike Locksley than losing his starting quarterback to injury.

Tyrrell Pigrome ran for a 61-yard score and threw for 218 yards at Purdue last Saturday as the replacement for Josh Jackson (Saline), who was out with high ankle sprain. Unfortunately, the Boilermakers amassed 547 yards and walloped the Terrapins 40-14.

“We didn’t play great team defense,” Locksley acknowledged. Tuesday. “We missed a lot of tackles and we didn’t play with the energy our defense has displayed throughout the course of the season.”

The Terrapins (3-3, 1-2 Big Ten) opened with a shutout of Howard and entered the Purdue game coming off a 48-7 rout of Rutgers. But Maryland also gave up 59 points to Penn State and stumbled mightily against Purdue, which moved the chains on 11 of 18 third-down attempts — including conversions of 11, 13 and 23 yards that left Locksley shaking his head.

He can only hope that Maryland’s defense — currently ranked 11th in the 14-team conference — can get it right Saturday against Indiana (4-2, 1-2). The Hoosiers are averaging 33.3 points per game and rank second in the Big Ten in yards passing behind Purdue.

The Terrapins will be without senior defensive back Tino Ellis, who is out for the year with an upper body injury after starting the first six games. Ellis started all 12 games last season and was honorable mention Big Ten.

Jackson, the junior left tackle on the No. 23 Hawkeyes’ offensive line, wasn’t about to point fingers. He knows there is plenty of blame to go around and figures there are ways to solve things.

“Just be a team. Just communicate,” he said. “It’s on everybody’s hands, to be honest. It’s not just one guy’s fault.”

Iowa (4-2, 1-2 Big Ten) has lost back-to-back games to Michigan and Penn State, scoring just 15 points in all. The Hawkeyes, who scored in every quarter of their first four games, have had just one touchdown and three field goals in their last eight quarters. They also have six turnovers the last two games after just one in the first four. There have been penalties — eight against Michigan — to go with mental mistakes.

Quarterback Nate Stanley was sacked eight times in the 10-3 loss to Michigan, and then twice in Saturday’s 17-12 defeat to Penn State.

Stanley credited opposing defenses with some of the issues, but he, too, knew much of the blame fell on the Hawkeyes.

“When it comes down to it, we’re the ones who have held on to the ball (too long) or committed the penalties,” Stanley said.

Tight end Nate Wieting agreed, and said he thinks the team is “really close” to playing the best it can.

“I think you have to have some patience as a player, that not everything is going to be perfect,” Wieting said.