The Titans were given a one-year ban because of substandar APR scores, which have nothing to do with the current coaches and players. 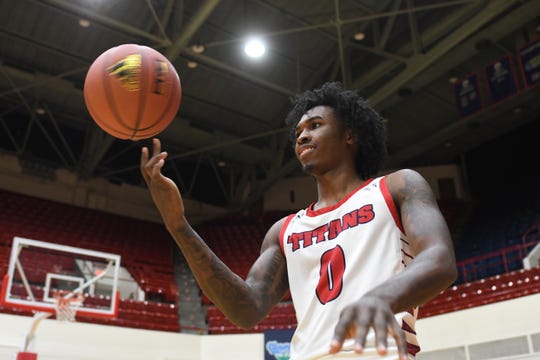 Detroit — Detroit Mercy men's basketball has made just one NCAA Tournament this century, in 2012, and it's not like the experts are pumping up the Titans to play Cinderella anytime soon.

That said, the Titans play in a very-down Horizon League, so who knows who'll be left standing come March.

That's why, sure, it absolutely stung when the NCAA ruled in May that Detroit Mercy would get a one-year postseason tournament ban.

Especially upsetting is the reason: failing to meet Academic Progress Report standards, which use a four-year window to determine a score. That means no current coach or player on the roster has anything to do with those grades.

Detroit Mercy is in the appeals process, but head coach Mike Davis didn't sound optimistic Wednesday about the Titans' chances of getting it overruled.

Still, Davis is trying to take the big-picture approach.

"I think one day the NCAA is gonna make a rule that if no one is there that had anything to do with anything, then let it go, because then you're punishing someone that has nothing to do with what happened," said Davis, whose made nine NCAA Tournament appearances as a head coach, in 19 seasons — four at Indiana, one at UAB, and four at Texas Southern. "At the same time, our focus is on building a program, and not just trying to go to the NCAA Tournament for one year.

"It's gonna take time for us to build, and not one player we have has even mentioned the NCAA Tournament.

"You can still have a great season and continue to build on that.

"To me, that's what's really important."

You get the sense Detroit Mercy believes that poll is flawed.

It has had another offseason of serious turnover on the roster, with seven new players, including several transfers. Already, in just Davis' second season, every player on the roster is one that he recruited to come to Detroit.

Among them, of course, is sophomore point guard Antoine Davis, the coach's son who made national headlines last year when he broke Steph Curry's NCAA freshman 3-point record. He briefly flirted with the idea of going pro, and projections he was privy to had him possibly as a second-round pick, but he decided he needed more polishing.

The NCAA ban doesn't have him regretting anything.

"It was unfair, really. It had nothing do with us," said Antoine Davis, who was the Horizon League freshman of the year after averaging 26.1 points and piling up 132 made 3-pointers. "But, I mean, it's just another obstacle that we have to overcome.

"Just keep focusing, that's the main thing, knowing we probably won't be able to go to the (NCAA) Tournament. But (we can) at least win the regular season and keeping getting better and growing as a program."

Davis had little help around him on offense last year, and thus always saw double-teams, and often even saw triple-teams.

This year, he should get some more space, with several key additions, including another coach's son, Brad Calipari, whose dad, John, is the head coach at Kentucky. A deep threat in his own right — Antoine Davis calls him a "really, really, really good shooter" — he transferred from Kentucky, because he wanted an opportunity to get some minutes.

Given his dad's relationship with Mike Davis, Detroit Mercy was a fit he felt comfortable with, even though the NCAA ban hit hard.

"You know, it was tough hearing that," said Calipari, a guard who said news of the NCAA ban sort of trickled out, rather than at some big team meeting. "Hopefully things get cleared up and they let it go and see it for what it is. Hearing that it's a possibility that it might not happen is kind of like, you know, what if you get that far and win your conference tournament and can't go. It's like, then what?"

In the coach's words, it's about more than just one season, it's about the program. and for the record, Mike Davis, who once led Indiana to the national-championship game, calls Detroit Mercy his "dream job."

Another intriguing player is senior forward Justin Miller, a 6-foot-6, 268-pound mountain of a man who transferred from Louisiana Lafayette. Detroit Mercy was anxiously awaiting word from the NCAA if he would be cleared to play immediately, and the good news came Wednesday night.

"I'm excited. My love for coming to work every day is even higher now than it's ever been," said Mike Davis, whose team has two scrimmages upcoming, Michigan in Ann Arbor today and Central Michigan next week, and then faces another solid nonleague schedule, with road games at N.C. State, Clemson, Notre Dame and Gonzaga before opening Horizon League play at rival Oakland on Dec. 28.

"We recruited every kid that's here now. They bought in."

That's saying something, when it would've been just as easy to check out.