Saturday's Top 25: No. 2 LSU edges Auburn, will face Alabama next

Joe Burrow passed for 321 yards and a touchdown, ran for another score, and second-ranked LSU edged No. 9 Auburn 23-20 on Saturday.

Saturday's Top 25: No. 2 LSU edges Auburn, will face Alabama next 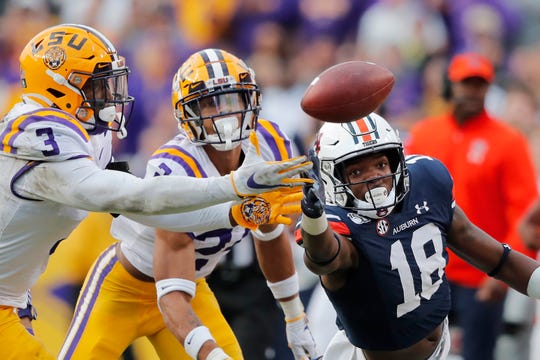 Baton Rouge, La. — Joe Burrow bounced up immediately from a high-speed hit that looked like it could have given the LSU quarterback whiplash as he was sent crashing into the Auburn bench area.

Trotting resolutely back to the line of scrimmage, Burrow resumed his school-record eighth career 300-yard passing performance in a tense, top-10 clash that put a premium on grit and perseverance.

Burrow passed for 321 yards and a touchdown, ran for 47 yards and another score, and second-ranked LSU edged No. 9 Auburn 23-20 on Saturday.

“If your quarterback shows toughness like that, it can kind of get your team going,” Burrow said. “If you lay down on the field and don’t hop right back up, it shows your team that you are not really into it.”

The victory ensured LSU (8-0, 4-0 SEC) would be unbeaten heading into its highly anticipated Nov. 9 tilt at Alabama, which entered this weekend ranked No. 1.

Clyde Edwards-Helaire rushed for 136 yards and touchdown for LSU, which wasn’t able to put away Auburn (6-2, 3-2) until Derrick Dillon recovered an onside kick with 2:31 left.

“It was a gut check tonight,” LSU coach Ed Orgeron said, praising the way his players stuck together. “They didn’t want to be denied.”

While LSU’s prolific, up-tempo spread offense rolled up 508 yards, the unit didn’t approach its 50.1-point scoring average against an Auburn defense that thwarted LSU drives into its territory with a pair of fourth-down stops and an interception.

“They fought their guts out and our defense played unbelievable,” Auburn coach Gus Malzahn said. “We had opportunities and we didn’t seize the moment. We just didn’t get it done offensively.”

LSU had not previously scored fewer than 36 points in a game, but Auburn’s defensive front put pressure on Burrow, sacking him three times.

Still, Burrow didn’t flinch when he was leveled along the sideline after 14-yard scramble on third-and-12 in the first half. He completed five of his next six throws, ending with a 20-yard touchdown on a fade to Terrace Marshall Jr.

Burrow completed 32 of 42 passes. His top target was Ja’Marr Chase, who caught eight passes for 123 yards.

“We showed toughness today. It was not a pretty win by any means,” Burrow said. “SEC games aren’t going to be pretty. When you can come out on top of a top-10 team and feel like you could have played better, it’s always a good thing.”

Bo Nix completed 15 of 35 passes for 157 yards and one late touchdown to Seth Williams that gave Auburn the opportunity to set up a meaningful onside kick.

D.J. Williams rushed for 130 yards for Auburn, which looked primed to go ahead by a touchdown in the third quarter when Williams sprinted into the open field from his own 20.

Safety Grant Delpit forced Williams out of bounds just inside the 10, and Auburn couldn’t parlay the 70-yard run into a touchdown, settling for a field goal to make it 13-10.

That lead lasted until five minutes remained in the third quarter, in part because Burrow’s screen to Chase was stopped on fourth-and-goal from the Auburn 2. Later in the quarter, Burrow’s pass intended for Chase was intercepted by Roger McCreary at the Auburn 2.

LSU hadn’t trailed that late in a game all season, but LSU finally pushed in front by going back to a running game that had struggled most of the first three quarters. Edwards-Helaire ran four straight times for gains for 45 yards, capped by his 6-yard score to put LSU in front 16-13.

(At) No. 1 Alabama 48, Arkansas 7: Mac Jones passed for 235 yards and three touchdowns filling in for injured Alabama star Tua Tagovailoa. Even without the Heisman Trophy candidate Tagovailoa, the Tide (8-0, 5-0 Southeastern Conference) raced to a 41-0 halftime lead and Jones only played one drive into the second half.

The Razorbacks (2-6, 0-5) couldn’t muster much challenge on either side of the ball in what turned into a drama-free tuneup for Alabama’s game in two weeks against No. 2 LSU.

The Tigers (6-0 Atlantic Coast Conference) easily extended their program best streak and opened 8-0 for the fourth time in the past five seasons, jumping on the Eagles (4-4, 2-3) early and never letting up. Clemson had the ball six times in the first 30 minutes and scored each time – including Etienne’s TD runs of 3, 4 and 5 yards – to take a 38-7 lead by halftime.

CJ Verdell ran for a career-high 257 yards and three touchdowns for the Ducks (7-1, 5-0 Pac-12), who haven't lost since the season opener against Auburn.

Anthony Gordon's 5-yard touchdown pass on fourth down to Brandon Arconado with a minute remaining gave Washington State a 35-34 lead. But then Justin Herbert completed four straight passes on the ensuing drive to get the Ducks close for Lewis' kick.

After becoming Utah’s career leader in yards rushing last week, Moss increased his total to 33 touchdowns on the ground and surpassed Del Rodgers, who set the previous mark of 31 from 1978-81. Moss also reached 100 yards rushing for the 15th time, breaking the school record he had shared with Devontae Booker and John White IV.

California’s defense had held 14 consecutive opponents under 25 points, the longest active streak in the country.

Tyler Huntley threw for 214 yards and a touchdown on 11-for-17 passing before sitting out the second half and resting his injured lower left leg.

(At) TCU 37, No. 15 Texas 27: Freshman Max Duggan threw two touchdown passes, including a tiebreaking 44-yarder to Jalen Reagor the first play after one of Sam Ehlinger’s career-high four interceptions. Duggan finished with a career-best 273 yards passing against the Big 12’s worst pass defense and ran for a clinching score late as the Horned Frogs (4-3, 2-2 Big 12) bounced back from consecutive conference road losses. Duggan led TCU with 72 yards rushing.

The Longhorns (5-3, 3-2) lost a third straight game in Fort Worth for the first time since the 1940s. It was the fifth win in six tries against Texas for the Horned Frogs, which includes their first four-game winning streak in the series since the 1930s.

Appalachian State (7-0, 4-0 Sun Belt) put on an overwhelming defensive performance at rain-soaked Ladd-Pebbles Stadium. When the Mountaineers took a 23-0 lead with 3:45 left in the third quarter, South Alabama had not run a play beyond midfield and had gained only 43 yards and one first down on 32 offensive snaps. The Jaguars (1-7, 0-4) were held to a season-low 139 total yards.

(At) UCLA 42, No. 24 Arizona State 32: Joshua Kelley scored a career-high four touchdowns and rushed for 164 yards. Kelley has rushed for over 100 yards in three of the past four games. The Bruins scored on five of their first six drives, including four straight from late in the first quarter to midway in the third after it was tied at 7.

Dorian Thompson-Robinson completed 16 of 23 passes for 176 yards and two touchdowns. The sophomore injured his left leg after being hit on a scramble during the fourth quarter and did not return.