Ashton Hagans scored a career-high 26 points as Kentucky fought through another close game against what should have been a lesser opponent. 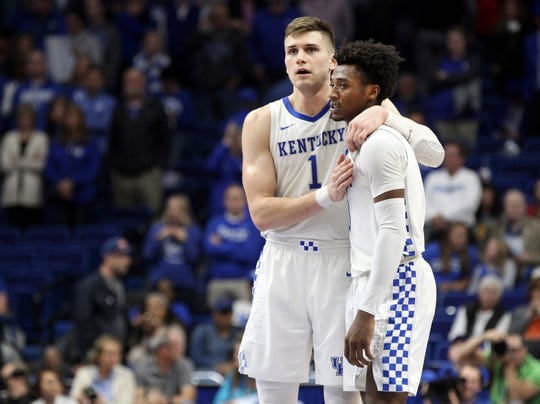 Lexington, Ky. — John Calipari breathed a sigh of relief after his team survived another scare.

Ashton Hagans scored a career-high 26 points, and No. 9 Kentucky fought through another close game against what should have been a lesser opponent, beating Utah Valley, 82-74, on Monday night.

“I’m happy we won,” Calipari said. “This season as long as it goes and being here and knowing how teams play against us, and how they’re charged up and then the next game they don’t play as well … whew. I was trying to be as positive as I could be until the end. I couldn’t take it anymore.”

The Wildcats (3-1) dropped out of the No. 1 spot in The Associated Press Top 25 after losing at home to Evansville last week, and they had to overcome a late surge to hold off the Wolverines.

Kentucky led by 16 points early in the second half, but Utah Valley steadily chipped away until T.J. Washington’s 3-pointer got the Wolverines (3-2) within one at 68-67 with 3:26 remaining. Nate Sestina responded with a three-point play that helped the Wildcats pull away.

“We knew that coming in here Kentucky was going to be amped up and they were,” Utah Valley coach Mark Madsen said. “Kentucky did a fantastic job of executing their game plan and really making big plays down the stretch.”

Kentucky was without second-leading scorer Immanuel Quickley, who sat out because of a chest injury. Quickley has scored 16 points in each of the last two games.

The Wildcats also have been without forward EJ Montgomery, who has missed the past three games because of an ankle injury. Coupled with Quickley’s injury, Kentucky’s roster has dwindled to seven scholarship players, leaving the Wildcats short-handed in practice.

“We are who we are right now,” Calipari said. “We are what the score says we are. … We got to get E.J. back, got to get Immanuel back and figure out what we are.”

Hagans also has battled a leg injury this season, but he has remained consistent.

Nick Richards had 21 points and 10 rebounds, while Tyrese Maxey added 14 points for Kentucky.

Washington led the Wolverines with 22 points, followed by Trey Woodbury with 17 and Jamison Overton with 10.

DeMarco Dickerson had 13 points and eight rebounds for the Saints. He also had eight turnovers. Kevin Smith added 13 points.

Kevin Kangu had 11 points for the Golden Grizzlies (4-2), which earned their fourth straight home victory.

Oakland led 34-19 at halftime after holding Hartford to 7-of-25 shooting (25%). Hill-Mais had 12 points and six rebounds at the break, and Oladapo added 10 points and eight boards.

D.J. Mitchell had 11 points for the Hawks (3-2). Hunter Marks added 11 points and 13 rebounds, and Traci Carter had six steals.

The Buckeyes (4-0), who moved up six spots in the AP Top 25 after beating then-No. 10 Villanova last week, jumped out to a 28-3 lead against the overmatched Hatters (2-2), built a 42-14 halftime advantage and cruised in the second half.

The bright spot for Stetson was Rob Perry, who finished with 17 points.

Zigmars Raimo led Hawaii (3-2) with 16 points. Eddie Stansberry, the Rainbow Warriors leading scorer (20 points per game) was held to 10 points on 4-of -4 shooting, thanks to the smothering defense of Frazier.

Diogo Brito added 17 points and Brock Miller chipped in 10 for the Aggies. Justin Bean and Alphonso Anderson each had 11 rebounds.

Utah State (5-0) dominated the inside, outrebounding UTSA 55-36, outscoring the Roadrunners 46-16 in the paint and 38-8 in second-chance points.

The Tigers improved to 5-0 for the first time in 15 years.

Colgate (1-3) struggled to get anything going against the Tigers’ overwhelming size and suffocating defense. Jordan Burns had 18 points and Rapolas Ivanauskas added 12 for the Raiders.

(At) No. 23 Colorado 69, UC Irvine 53: Tyler Bey and McKinley Wright each scored 16 points and Colorado leaned on a strong defensive effort to beat UC Irvine.

Colorado (3-0) pressured Irvine into 22 turnovers leading to 21 points for the Buffaloes, who have won all eight of their meetings with the Anteaters. It was the 17th win in Colorado’s last 19 home games.