Mike Glass threw for three TDs and ran for another as Eastern Michigan rolled to a 45-17 win. 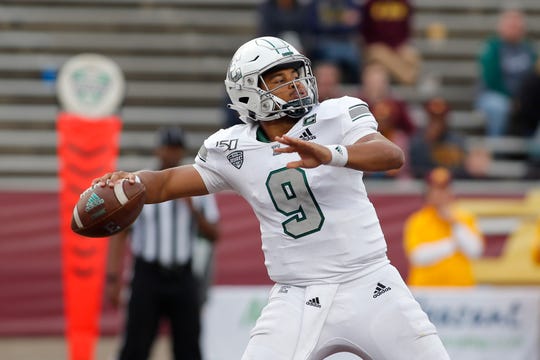 Dekalb, Ill. — Mike Glass threw for three touchdowns and ran for another and Eastern Michigan rolled past Northern Illinois, 45-17, on Tuesday night.

The Eagles (6-5, 3-4) snapped an 11-game losing streak to the Huskies (4-7, 3-4) dating to 2007 and ended NIU’s title hopes in the Mid-American Conference West Division with one league game remaining.

Shaq Vann rushed for 101 yards and a touchdown on 14 carries for Eastern Michigan and Arthur Jackson caught two TD passes. Glass was 20-of-24 passing for 235 yards.

The three previous games between these programs went to overtime.

The status of quarterback Tanner Morgan is uncertain for Minnesota’s game at Northwestern after back-to-back sacks in the last game put the sophomore in the concussion protocol.

Coach P.J. Fleck said Morgan has made progress this week, but the Big Ten’s leading passer has not been cleared. The Gophers (9-1, 6-1) play Saturday against the Wildcats (2-8, 0-7), with a one-game lead in the West Division on Wisconsin.

Morgan could be a game-time decision. If he doesn’t play, either Jacob Clark or Cole Kramer would start. They’re both true freshmen that Fleck would prefer to keep at the four-game limit to preserve their redshirt status.

... Vanderbilt athletic director Malcolm Turner said Derek Mason has his full support as the Commodores coach and they’ll be working together to give the football program the resources and support needed to succeed.