Shamar Dillard and Noah Morgan each score 12 as the Eagles win their sixth straight, downing North Carolina 58-54 at the Jamaica Classic.

Montego Bay, Jamaica — Shamar Dillard and Noah Morgan each scored 12 points to carry Eastern Michigan to a 58-54 win over North Carolina A&T on Sunday at the Jamaica Classic. 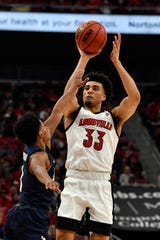 A Jackson basket got the Aggies within two points with 2:33 remaining but North Carolina A&T didn’t score the rest of the way as Eagles made 2 of 4 free throws from there.

(At) No. 15 Michigan State 79, Hartford 34: Taryn McCutcheon and Julia Ayrault had 14 points apiece, Kayla Belles had her first career double-double for Michigan State.

Nia Clouden added 12 points for the Spartans, and Belles had 11 points with a career-high 11 rebounds.

Kamrin Reed scored 16, and Chelayne Bailey added 12 for the Broncos, who led by 10 early in the fourth quarter.

Amber Gaston led Florida Atlantic (4-2) with 19 points off the bench.

(At) Iowa 85, Cal Poly 59: Redshirt freshman CJ Fredrick scored a career-high 21 points, hitting all five of his 3s, and Iowa overwhelmed Cal Poly for its third straight win. Luka Garza had 18 points with nine boards for the Hawkeyes (4-1) in their final tuneup ahead of a stretch featuring significantly tougher opponents.

Iowa plays No. 12 Texas Tech, either Creighton or San Diego State, Syracuse, Michigan, Minnesota, Iowa State and Cincinnati over its next seven games. The Hawkeyes got rolled by DePaul 93-78 at home on Nov. 11, its only matchup against a fellow high major so far.

(At) Minnesota 79, North Dakota 56: Gabe Kalscheur scored 18 points on 7-of-9 shooting, Daniel Oturu added 15 points, and Minnesota beat North Dakota. Jarvis Omersa added 11 points and nine rebounds off the bench for Minnesota (3-3), which had five players score in double figures. A game after hitting the second-most 3-pointers in school history, the Gophers scored 42 points in the paint.

Marlon Stewart led the Hawks with 14 points, his 12th straight game in double figures and freshman De’Sean Allen-Eikens chipped in 12 points.. North Dakota (1-4) shot 41.4% from the field and had 19 turnovers in losing its fourth straight game.

(At) No. 2 Louisville 82, Akron 76: Ryan McMahon made two free throws with 16.8 seconds left, helping No. 2 Louisville escape Akron. The Zips trailed 55-33 early in the second before getting within 78-74 on the second of Loren Cristian Jackson’s three consecutive layups. Darius Perry’s two free throws with 23 seconds left provided a six-point lead before Jackson drove again to make it 80-76.

Nwora scored 15 of his 18 points in the first half, Steven Enoch added 17 and Dwayne Sutton and McMahon 10 each for the Cardinals (6-0). Sutton also had 10 of Louisville’s 48 rebounds.

Jackson and Tyler Cheese each had 20 for the Zips (4-2), who had won three in a row coming in.

Florida 70, No. 18 Xavier 65: Keyontae Johnson and Andrew Nembhard had 15 points each and Florida (5-2) held off Xavier in the Charleston Classic championship. Xavier closed to 68-65 on Quentin Goodin’s 3-pointer with 1:08 left and had a strong shot to tie on Paul Scruggs’ clean look with 13 seconds left. Scruggs had 24 points.

No. 24 Baylor 87, No. 17 Villanova 78: Jared Butler scored 10 of his 22 points during the final 6 minutes, helping Baylor pull away for a victory over Villanova. MaCio Teague scored 18 points while Davion Mitchell added 13 to help the Bears (5-1) pass their first Top 25 test. , a matchup that for much of the way felt like a potential Sweet 16 preview. Collin Gillespie scored 27 points, Saddiq Bey finished with 16 points and Jeremiah Robinson-Earl had 12 points and 11 rebounds for Villanova.

(At) No. 9 Kentucky 81, Lamar 56: Tyrese Maxey scored 21 points and Kentucky made a season-high 10 3-pointers. Maxey made a career-high four 3-pointers against, surpassing three he made in the Wildcats’ opening victory over Michigan State. Ashton Hagans added 15 points for Kentucky (5-1). Immanuel Quickley had 11, and Nick Richards added 10 points, 13 rebounds and seven blocks. Davion Buster led Lamar (4-2) with 19 points.

(At) No. 12 Texas Tech 96, Long Island-Brooklyn 66: Freshman Jahmi’us Ramsey scored a career-high 27 points, and Texas Tech pulled away after trailing by a point at halftime. Ramsey was 5-of-6 from 3-point range and grabbed six rebounds in the third-highest scoring game for a freshman at Texas Tech (5-0). Raiquan Clark scored 18 points for Long Island (1-5).

On Sunday, both were inducted into the National Collegiate Basketball Hall of Fame.

That happened right after the Duke standout’s freshman season and he used that as motivation throughout the rest of his college career.

“It was the first time I’ve ever been cut from a team,” said Battier, a Detroit Country Day product. “I was pretty heated and after that I worked my tail off. I had one goal and that was I wanted my coach to be sweating every second when I was on the bench.”

Majerus passed away in 2012, but his coaching career stretched 25 years and he won 517 games with four teams. With Utah, he won 10 conference titles in 13 years and led the Utes to two Sweet 16’s and an Elite Eight.

Majerus was joined in the class by fellow coaches Lute Olson and Homer Drew.