Geo Baker, who only had four points in Rutgers' loss to Michigan State Sunday, responded with 22 in the Scarlet Knights' victory over the Badgers.

Piscataway, N.J. — Coming off his worst outing of the season, Geo Baker knew he had to be more assertive.

Baker scored 22 points in bouncing back to lead Rutgers past Wisconsin 72-65 on Wednesday night. 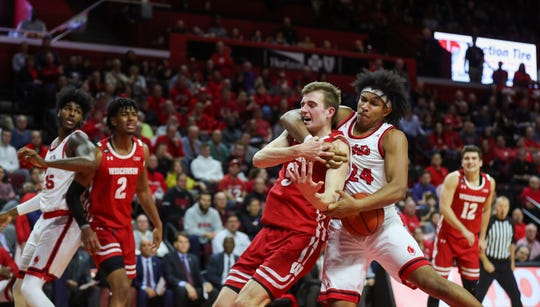 “You always got to stay positive and stay aggressive,” Baker said. “I felt like I wasn’t aggressive in the Michigan State game, looking for my shots and then when it’s not there, find open teammates, so I really wanted to come out aggressive against Wisconsin and am just happy that it worked out this game.”

Rutgers (7-3, 1-1) opened the game with a 9-0 run and never trailed until Baker was stripped by Aleem Ford in the final seconds of the first half while driving the lane for a layup. Forder hit Trevor Anderson on the outlet pass and he sank a three-pointer from the left win at the buzzer to give the Badgers 33-32 halftime lead.

However, it wouldn’t last long.

After trading a couple of leads, Akwasi Yeboah stole the ball from Nate Reuvers and had a fast-break layup to give Rutgers a 38-36 lead at the 17:15 mark. Yeboah would score eight points and grab eight rebounds before fouling out with 1:30 to go. Rutgers would lead by as many as nine with under a minute left.

“I told myself this was a big game, I need to do whatever I need to do,” Johnson said. “Luckily today, things were clicking and I was getting rebounds and making all my shots, so it was just a good day for me.”

(At) No. 15 Arizona 99, Nebraska-Omaha 49: Josh Green and Chase Jeter had 15 points each, helping No. 15 Arizona bounce back from its first loss of the season.

The Wildcats (10-1) returned to McKale Center for the first time in 17 days with a dominating performance, jumping on Omaha with a big opening run and keeping their foot on gas.

Arizona’s Nico Mannion had 13 points and 11 assists, and Dylan Smith scored all 14 of his points in the first half.