Jesus Cruz had 23 points as Fairfield narrowly beat Oakland 61-59 in overtime on Saturday.

Jesus Cruz had 23 points as Fairfield narrowly beat Oakland 61-59 in overtime on Saturday.

The Stags forced a season-high 20 turnovers. 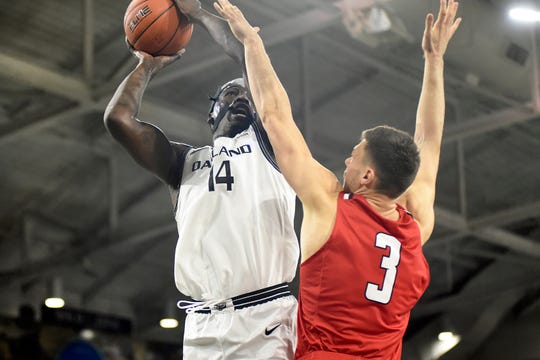 After entering the locker room at the half tied 31-31, the two teams battled to a tie again in the second half, forcing overtime. The Stags finally shook off the Golden Grizzlies in the extra period to earn the 2-point win.

Xavier Hill-Mais had 18 points and seven rebounds for the Golden Grizzlies (5-8), who have now lost four games in a row. Daniel Oladapo added 16 points and eight rebounds. Brad Brechting had 10 points, 13 rebounds and three blocks.

Anselm Uzuegbunem scored 16 points and Shamar Wright added 10 for the Cougars (2-10), who shot 37.3% in losing their eighth straight.

Zeke Moore, who led the Cougars in scoring coming into the contest with 13 points per game, shot only 20% (1 of 5).

Detroit faces Oakland on the road next Saturday.

Kysre Gondrezick added 14 points and Tynice Martin 11, both making a pair of free throws in the final 20 seconds for the Mountaineers (8-1), who have won four straight.

Nia Clouden had 16 points and eight rebounds for the Spartans (7-4) and Shay Colley added 11 points.

Eastern Michigan 84, (at) Detroit Mercy 70: Areanna Combs scored 22 while Autumn Hudson and Courtnie Lewis each had 14 in the third straight win for Eastern (5-6). Markyia McCormick had 19 points for Detroit Mercy (0-11).

Western Michigan 79, Denver 70: In the Puerto Rico Classic in San Juan, Breanna Mobley finished with 23 points and 10 rebounds while Jordan Walker had 22 points for Western (6-3), which has won four straight.