Eastern Michigan shot 27.1 percent from the field and failed to defend the perimeter in a 69-45 loss to Akron.

Ypsilanti — Eastern Michigan coach Rob Murphy was offended in October when his team was picked to finish last in the Mid-American Conference West Division, but the Eagles played like a last-place team on their home floor in the MAC opener Saturday in a 69-45 loss to Akron.

How bad did things get for the Eagles? Well, when Akron’s Xeyrius Williams — a transfer from Dayton — made a 3-pointer with nearly six minutes remaining, the Zips had as many 3-pointers (11) as Eastern Michigan had field goals.

Eastern Michigan entered the day with a 10-3 record, but several victories came against weak competition, including Siena Heights, Goshen, Michigan-Dearborn and Concordia. 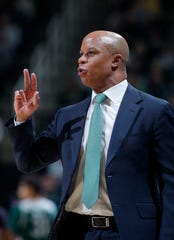 Akron was tested during the non-conference slate, playing competitively in losses to West Virginia (94-84) and then-No. 2 Louisville (82-76), and the Zips were never threatened by the Eagles after using a 19-5 run to open up a 24-10 cushion.

The Eagles will definitely finish last if they can’t defend better with their signature zone defense and put the ball in the basket with more regularity. They also need to do a better job of taking care of the ball, a reason they are last in the MAC in assist-to-turnover ratio, including a 19-turnover, six-assist game against Akron. They shot 30.6 percent from the field in a 64-49 loss to UNLV on Dec. 28 while being outrebounded by a 50-30 margin, 19-8 on the offensive glass.

Eastern Michigan has to find something to hang its hat on like Akron has with its 3-point shooting and 3-point defense, leading the MAC in both areas.

“It comes down to players making plays and you have to make shots and you have to get stops. We didn’t do that, and some of that was Akron and a lot of it was us,” Murphy said after the loss. “To their credit they made shots and credit their point guard (Loren Jackson) who broke us down. We broke down in some instances late in the shot clock and any time you allow penetration, which we haven’t all season, the zone collapses, and then you’ll either have drop downs or open shooters out, and once they started making shots they became more confident.

“It’s then when you have to dig your feet in the sand and say, ‘This is our building and we’re going to get stops and continue to fight.’ I thought we had a little doubt at about the 8-minute mark in the first half and I hadn’t seen that all year, but again it’s a teaching moment, a learning moment and this game will help us get better.

“You’re looking at an experienced team (in Akron) that’s been through the battles of the MAC. They have a really good leader in their point guard, it’s a well-coached team, and most of our guys outside of Boubacar (Toure) and Ty (Groce), this is their first time competing in the MAC. As bad as it looks and as bad as it is, it’s really good for our teaching, so we’ll be fine and we’ll learn from it.”

The Eagles had been getting the job defensively prior to the MAC opener, sitting No. 1 in the MAC in scoring defense (60.7 points) behind a talented big man in Toure, who had 11 points and 17 rebounds in the loss to Akron.

And with no overwhelming favorite to win the MAC title this season — Buffalo has been the past several years before Bobby Hurley moved on to Arizona State after the 2014-15 season and Nate Oats to Alabama after last season — the league is wide open. Last week, Kent State traveled to Bowling Green and dominated the preseason East favorite, 79-61, and Ball State beat West favorite Toledo, 61-57.

While the Eagles didn’t take care of business it their conference opener, Central Michigan and Western Michigan did get things done at home Saturday.

The Chippewas showed they could still be dangerous on the perimeter despite the 3-point line being pushed back nearly a foot.

After a disastrous 8-24 season a year ago, Western Michigan opened the MAC season with a 77-65 win over Ohio in Kalamazoo. The Broncos jumped out to a 13-0 lead before having to battle back from a 59-57 deficit with just under six minutes remaining.

Steve Hawkins, now in his 17th year as Western Michigan head coach, is thrilled to have a healthy Brandon Johnson after the 6-8, 220-pound forward was sidelined for the entire 2018-19 season due to a knee injury.

Johnson had 18 points and eight rebounds in the win over Ohio and is averaging 14.9 points and 8.6 rebounds. Freshman guard B. Artis White (Canton) had a big MAC debut, scoring 18 while helping the Broncos limit Ohio to 33.8 percent shooting.