Clemson, S.C. — LSU’s Clyde Edwards-Helaire and Clemson’s Travis Etienne have much more in common than their Louisiana backgrounds heading into the national title game.

Both are smallish running backs who were overlooked at times in high school but have emerged as critical factors for next week’s College Football Playoff championship game.

“Definitely a great opportunity to go out there and finish it off with a 'W,'” said Etienne, a junior considering a jump to the NFL after playing for a second straight national crown.

Etienne has proven he can get it done on the biggest stage. But his path from Jennings, Louisiana to Clemson was far from direct.

The Tigers were locked into another promising tailback commit from Tennessee before Cordarrian Richardson had a change of heart and caused Clemson offensive coordinator and running backs coach Tony Elliott to scramble to fill the roster spot. Etienne emerged as a possibility and Elliott went to meet him in mid-January 2017 – soon after Clemson won the 2016 national championship over Alabama.

“When we saw him, we just hit it off,” said Elliott, who remembered waiting through visits from LSU and Tennessee before meeting the 5-foot-11 Etienne.

Etienne grew up a fan of the Southeastern Conference, first of Alabama and then LSU, from attending so many games as a teenager.

But after meeting Elliott and talking with coach Dabo Swinney, Etienne became hooked on Clemson.

He still can’t fully believe that Clemson reached out to “a small kid from Jennings, Louisiana.”

He can thank Richardson for that, who played at UCF as freshman before transferring to Texas A&M.

But when Clemson did make the call was when Etienne decided where he wanted to play college football, “like this is meant to be, me going there.”

The coupling has been fruitful ever since.

Etienne was the Atlantic Coast Conference player of the year the past two seasons, setting league marks for most rushing touchdowns (55) and total TDs (60).

He’s run for 1,536 yards so far this season and is seven yards away, at 3,990 fin three seasons, at breaking Clemson’s career rushing mark.

LSU coach Ed Orgeron, the interim coach in 2016, said whenever he sees Clemson play “or every time I’ve seen (Etienne) having success, I’m sick to my stomach.”

Orgeron said he loves his running backs, just wished that Etienne was part of LSU’s rotation.

“We wanted Travis Etienne, but it was too little, too late,” he said.

Not that Orgeron completely lost out. 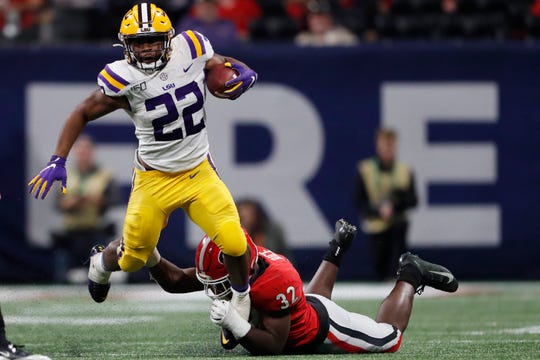 While Etienne was leaving his home state, Edwards-Helaire was excelling close to his future campus as a stellar prep tailback in Baton Rouge.

Edwards-Helaire was a one-time high school teammate of former LSU star tailback Derrius Guice. There was one distinction that stood out about Edwards-Helaire. The Tigers’ recent starting running backs like the 6-foot Leonard Fournette and 5-11 Guice were taller; Edwards-Helaire is just 5-7.

Edwards-Helaire has embraced the challenge, more than living up to that LSU running back pedigree. He has rushed for 1,305 yards and 16 touchdowns this season.

He was crucial in ending LSU’s eight-year run of futility against Alabama in a 46-41 victory this season with 103 yards and three touchdowns rushing with nine catches for 77 yards and another score.

Edwards-Helaire, whose mother once thought he was too small to play football, has dealt with having to prove himself on the field.

“It’s, ‘Lets see what this small guy can do as far as football,’ and then it’s, ‘Oh my gosh, he’s actually good,’” Edwards-Helaire said.

Edwards-Helaire had a hamstring injury leading up to LSU’s 63-28 win over Oklahoma at the Peach Bowl and was pretty much just a decoy in the semifinal win. He had just two rushes for 14 yards and sat once the game turned into a blowout.

Orgeron has said Edwards-Helaire should ready to play against Clemson.

“It’s something I’ve been doing, but it’s being displayed on a bigger screen right now,” he said.

Edwards-Helaire is confident in his abilities and is ready to prove doubters wrong once again.

And Clemson knows what he can do.