Rickea Jackson, who is the reigning Miss Basketball in Michigan, is averaging 13.4 points per game as a starter at Mississippi State.

Living on her own over 800 miles from her home, Rickea Jackson’s new life in Starkville, Mississippi, has required a lot of adjusting.

The former Detroit Edison Public School Academy basketball star had issues with shot selection. Her entire defensive demeanor needed recalibrating. And frankly, she admitted, without her mother’s guidance, she at first had trouble getting to school and practice on time — though that last bit was a habit quickly erased. 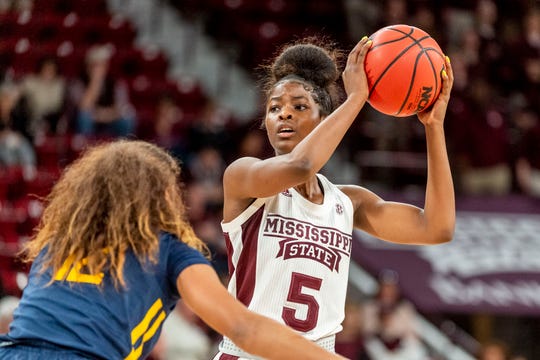 “We have very high standards here with that. If you’re late, then you’re going to run,” Jackson said. “And everyone knows I hate running.”

Mississippi State has very high standards for its on-the-court performance, too. The Bulldogs in 2017 and 2018 made national title game appearances, an 88-84 loss to Oregon preventing them from a third straight trip to the Final Four in 2019 — which would explain why Jackson might have had some jitters when she got named to the starting lineup for an opening-night matchup against Southern Miss.

“There’s 8,000 people there to watch you every night. That can be a challenge for young people, and I think she was probably getting used to all that.”

Jackson finished 1-for-5 shooting in 27 minutes, then followed that up by going 3-for-13 two nights later against Tennessee Martin. She’s rarely faltered since. Through 19 games, Jackson is shooting 47.5% from the floor, 40 percent from 3, and averaging 13.4 points per game, a clip that’s steadily rising along with Mississippi State’s No. 9 ranking.

The freshman forward, on top of achievements she earned in 2019 — McDonald’s All-American; Michigan’s Miss Basketball; a silver medal leading Team USA at the World University Games in Italy — already has been named the Southeastern Conference’s freshman of the week this season.

But Jackson’s success at the college level, albeit quickly found, was not easy. With the ball, she had to learn the difference between a “good shot and a great shot,” Schaefer said. Perhaps more importantly, to get minutes on Schaefer’s team, she also needed to learn some defense and rebounding.

“That part was really a huge change for me,” Jackson said. “The first day of practice, I was just standing on the sidelines like, ‘What the heck is this?’ He’s teaching us how to run, or get in front of a ball, but now I’m really just sitting there on the sideline like, ‘I cannot do this. This is the hardest thing ever.’”

Hard work is not something that Jackson shies away from. Schaefer said that "she's coachable and she listens," and proved it by getting better on the defensive end of the floor, while also taking her new role outside of scoring to heart.

“For her, it’s not just the shot selection, just the help defense. It’s learning to take a charge, it’s learning how important that is for us,” Schaefer said. “Early, she wasn’t rebounding. She was averaging like 2.3 rebounds per game, and I told her, ‘We’ve got to get six rebounds from you every night.’” 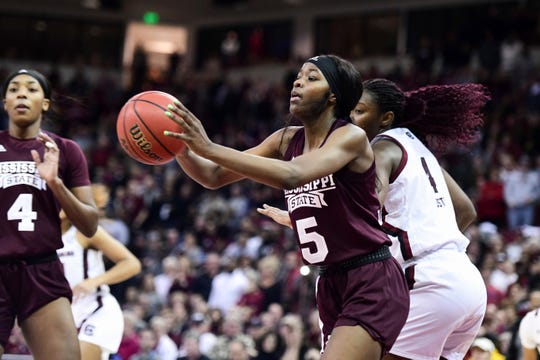 Over her last 10 games, she’s grabbing a hearty 6.2 boards per game, including five with 16 points against the No. 1 team in the nation, South Carolina, in an 81-79 road loss on Monday night.

“That’s mostly just energy and effort,” Schaefer said. "I think that for her, just seeing that and realizing the importance of helping us rebound, especially at her position, that's made a really big difference."

With just one senior on the team, leading scorer Jordan Danberry, Schaefer is banking on Jackson and the rest of Mississippi State’s underclassmen to grow from these mid-season stress tests, ready to roll on another tournament run.

While it’s safe to say Jackson has found her groove, Monday’s loss was a bump in the road for a Bulldogs team trying to prove its youth and inexperience won’t prove too much to overcome in March. It fell short in its other big test, a 67-62 defeat at then-No.3 Stanford on the last day of November, and with the program’s recent success, is getting everybody’s best shot.

Coming from Edison, the three-time defending state champion, where everybody wanted a piece, this is not foreign territory for Jackson.

“In high school, we were that team that everyone wanted to beat no matter what,” Jackson said. “And I definitely feel the target on our back (now).”

But the joke is on them: That target is what’s made Starkville feel like home.