The Boilermakers, motivated by coach Matt Painter's challenge for more toughness after a 17-point home loss to Illinois on Tuesday, had extra jump from the outset in a 70-51 home rout of the Badgers on Friday night. 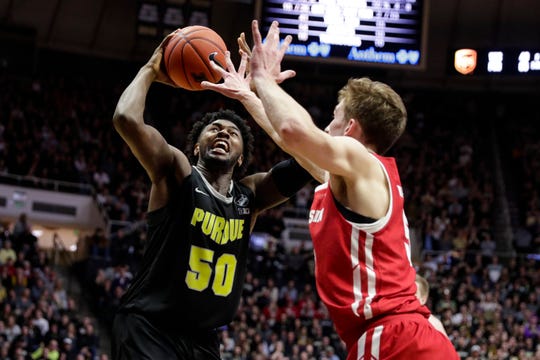 A team that had lost three of four somehow flipped a switch and dominated on the boards and defensively. A Wisconsin squad that had won three of four looked like the team whose intensity was in question after mustering its second-lowest point total of the season.

"I think it shows that on any night, we can hang with anybody," said Purdue's Evan Boudreaux.

Painter thought Boudreaux had the most energy in the past two practices and gave the senior forward his fifth start of the season. That translated to a game-high 13 rebounds as the Boilermakers enjoyed a 42-16 board edge, including 16 on the offensive glass.

"He gave us a spark from the jump," Eric Hunter Jr. said of Boudreaux.

"You have to be ready to play, some things might not go your way, but you have to embrace the physicality of the game," Painter said. "I thought tonight we did a much better job of that."

The Badgers (12-8, 5-4), who hit a program-record 18 3-pointers in a Tuesday home rout of Nebraska, missed their first eight long-range attempts in the one-sided first half. The visitors finished 7 of 22 in 3-pointers. Purdue was 9-of-19.

But Wisconsin coach Greg Gard didn't hesitate to emphasize that 3-point misses weren't as much of a factor as a lack of rebounding effort that continually afforded second chances.

"That (3-point shooting) was secondary to how we couldn't clean up the glass on the defensive end," Gard said. "That ignited Purdue and gave them a lot of confidence. You keep getting cracks at it, you're eventually going to make a shot. They were quicker to the ball than we were.

"You continue to give 'em crack after crack after crack. We rotated guys in. It's not that we didn't talk about it for two days straight constantly, knowing that they were the No. 1 offensive rebounding percentage team in the conference, it was going to be a battle and always is. We didn't do a good job of matching physicality."

Gard also pointed at how his team had just three personal fouls in the second half.

"That tells me we weren't physical enough," he said.

"If we come out and are aggressive early, because there's no reason why we shouldn't be in every game, there's a chance to win every game," Boudreaux said. "So moving forward, that's our expectation."

Purdue was pumped from the outset. Haarms, a 7-foot-3 junior center from the Netherlands, hit a 3-pointer as part of an early 18-4 run. When Wisconsin called for a timeout, the crowd continued to roar as Haarms' shot reaction with an emphatic flexing of his arms was displayed on the video boards.

"After Illinois, we had to look at ourselves," Haarms said. "We were going to be the aggressor tonight."

The Badgers didn't resemble a squad that seemed to be on the rise recently. It's one thing to lose tough road games, but this one wasn't anywhere near close. Perhaps coach Greg Gard needs to steal a page from Painter's playbook and question his players' toughness.

It's not the first time the Boilermakers have been surprisingly strong — the lone win in four previous games was a 29-point home rout of No. 8 Michigan State. So why is this team unable to be consistently effective? Purdue has another month to figure that out and try to make something of a so-so season.

(At) No. 13 Butler 89, Marquette 85: The senior guard Kamar Baldwin scored the Bulldogs' final nine points of regulation, erasing a six-point deficit in the final 2½ minutes, then added 10 more in overtime as Butler rallied for a remarkable victory over Marquette.

Things easily could have gone the other way for the Bulldogs (16-4, 4-3 Big East). They had two injured teammates out and were staring at the possibility of a fourth consecutive loss with Markus Howard, the nation's leading scorer, lined up against Baldwin.

Instead, Baldwin put his head down and made play after play, finishing with 31 points and eight rebounds — both matching season highs — as well as five assists.

Markus Howard scored 18 points in the first half when Marquette took a 39-35 lead.

But with Baldwin and Henry Baddley taking turns defending Howard in the second half, Howard only had eight points in the final 25 minutes, finishing with 26 points.

But Baldwin scored the next nine to give Butler a 71-68 lead. Koby McEwen's 3-pointer tied it with 2.9 seconds left. After Baldwin's errant 3 at the buzzer, he didn't miss many more.

Baldwin scored nine of Butler's first 11 points in overtime and eventually closed it out at the free throw line.