Oakland women's basketball coach has back surgery, will miss rest of season

Jeff Tungate is in his seventh season on the job, and is under contract through next season.

Oakland women's basketball coach has back surgery, will miss rest of season

Oakland women's basketball coach Jeff Tungate underwent back surgery Monday morning and will miss the remainder of the season.

Tungate had the surgery at Beaumont Hospital in Royal Oak, and doctors said it was "successful," according to Tungate's wife, Kelley. 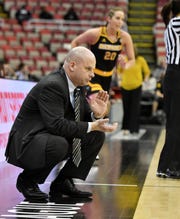 Tungate has had a history of back problems that caused him to miss seven games last season, and has kept him off the sidelines most of this season. He took a medical leave of absence in mid-November.

A botched spinal fusion 10 years ago let to complications in recent years, but he told The News last week he expects to be back on the job in April.

"I am determined to get myself 100-percent healthy in the very near future," he said in November.

Oakland, with a young roster, is 10-13 this season, seventh place in the Horizon League, but has played better lately, winning two of its last three games, including a win over rival Detroit Mercy. Oakland is 8-11 under acting head coach Ke'Sha Blanton.

Tungate is in his seventh season on the job. He held previous coaching jobs at IPFW, Oakland Community College and Clarkston High School, and spent seven seasons an assistant coach for the Oakland men's basketball team.

An Oakland graduate, he played baseball for the Golden Grizzlies.