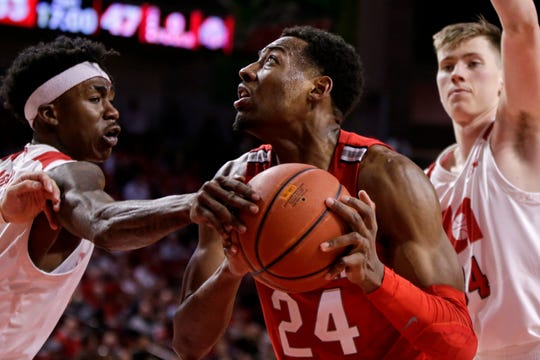 Rashad Williams, the Golden Grizzlies’ second leading scorer entering the contest at 15 points per game, shot only 20% for the game (4 of 20).

The Flames evened the season series against the Titans with the win. Detroit defeated UIC 70-69 on Jan. 25. UIC finishes out the regular season against Oakland at home on Saturday. Detroit Mercy closes out against IUPUI on the road on Saturday.

The Buckeyes rode the momentum of their 79-72 win over Maryland on Sunday to a fast start. They led 26-12 after making 9 of their first 11 shots, including 5 of 6 3-pointers.

Duane Washington Jr. made three straight 3s to open the game and finished with 14 points. He started for the first time since Jan. 11, taking the place of Young, who sprained an ankle against Maryland.

C.J. Walker had 15 points and matched his season high with five rebounds.

The 6-foot-9, 270-pound Wesson scored eight of the Buckeyes’ first 16 points of the second half, working over whoever the undersized Huskers sent to defend him while posting his 11th double-double of the season.

The Buckeyes never led by fewer than 14 points after half, but their offense operated at nowhere near the efficiency it did early in the game. They shot 33 percent the final 20 minutes and missed 18 of their last 19 3-point attempts.

Illinois 74, (at) Northwestern 66: Alan Griffin set career highs with 24 points and six 3-pointers, Ayo Dosunmu scored 21 and the Illini (19-9, 11-6 Big Ten) moved into a tie for second place in the Big Ten behind Maryland. They took the lead with a big run in the first half and held off last-place Northwestern (6-21, 1-16) down the stretch to win their third straight since a four-game slide that knocked them out of the Top 25.

Devonte Green had 11 points and Justin Smith added eight for the Hoosiers (18-10, 8-9), who had a two-game winning streak end. Indiana has lost five straight at Mackey Arena over the past seven years.

(At) No. 3 Gonzaga 94, San Diego State 59: Filip Petrusev had 21 points and nine rebounds as Gonzaga clinched its eighth straight West Coast Conference regular-season title. Corey Kispert scored 16 points and Ryan Woolridge had 15 for Gonzaga (28-2, 14-1 WCC), which rebounded from its loss at BYU on Saturday. The win came on a night when former Gonzaga star Adam Morrison was honored.

Gonzaga has won 38 consecutive home games, the longest streak in the country.

(At) California 76, No. 21 Colorado 62: Matt Bradley matched his career highs of 26 points and five 3-pointers, and California pulled away in the second half.

Kareem South had 19 points and Paris Austin added 12 as the Golden Bears (12-16, 6-9 Pac-12) emphatically ended a five-game losing streak against the Buffaloes and gave first-year coach Mark Fox his most significant win of the season while handing Colorado a stinging setback.

The Buffaloes (21-8, 10-6) were among a handful of teams who began the night a half-game behind conference-leading Arizona State.