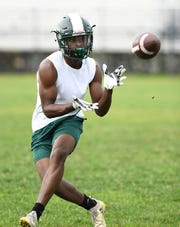 According to CM Life, campus police say McKinnie-Harper used four students' accounts to buy the iPhones through a university service called CONNECT CMU. According to court records, at least one of the alleged victims was a fellow student athlete, but not a football player. The cell phones, valued at more than $5,000, were then shipped to addresses in Detroit, McKinnie-Harper's hometown, police said.

McKinnie-Harper has denied the charges, which include fraud, larceny and using a computer to commit a crime. If convicted, he could face seven years in prison and thousands of dollars in fines.

McKinnie-Harper remains on scholarship, and is registered for classes, until there's a legal resolution, athletic director Michael Alford told The News. He can't participate in any team activities.

McKinnie-Harper played 11 games in 2019, with nine starts, but he missed the team's bowl game with a shoulder injury that required surgery. He had 36 tackles, including five in the Mid-American Conference championship game, plus 10 pass breakups and two forced fumbles.

As a senior at Cass Tech, he had six interceptions, 28 pass breakups and 32 tackles. As a receiver, he had 23 receptions for 487 yards and nine touchdowns. As a senior, he was unanimous first-team all-state. He won a state title at Cass Tech in 2016, and was a member of two Detroit PSL championship teams.

He was a three-star recruit with 12 Division I offers, including from Central Michigan and Eastern Michigan.