'Oh my, that is awesome': NCAA calls for spring-sports athletes to get extra year of eligibility

There still are many issues to work out, including scholarship ramifications.

'Oh my, that is awesome': NCAA calls for spring-sports athletes to get extra year of eligibility

It might not be game over for college seniors, after all.

The NCAA on Friday sent a memo to all member institutions saying it is recommending a waiver for at least spring-sports athletes, in the wake of the coronavirus pandemic that has essentially cancelled all sports domestically for the foreseeable future. 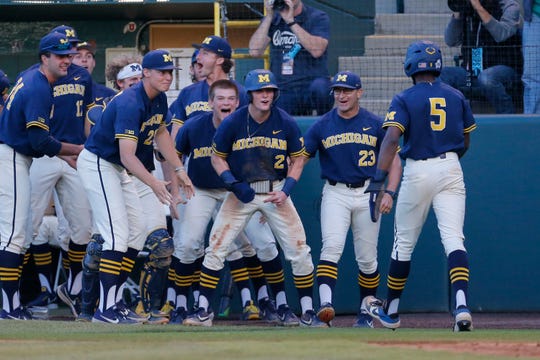 The NCAA acknowledged there are complications that need to be worked out, but that this is a start toward getting spring-sports athletes an extra year of eligibility.

"I absolutely believe they will have to make that happen," said Kathy Beauregard, the athletic director at Western Michigan.

Said Central Michigan athletic director Michael Alford: "I know there are a lot of details to still work on by the committee, but this was the right decision."

More: Wojo: Sadly, the games had to stop before the healing could begin

The NCAA, in its memo to member schools, didn't specify whether the waiver would apply to just seniors, or all college athletes who compete in spring athletics, which include the likes of baseball, softball and golf, among others.

The NCAA said it also is considering what to do with winter-sports athletes. Most seasons were wrapping up, including men's and women's basketball, which had their NCAA Tournaments cancelled. Seniors like Cassius Winston at Michigan State and Zavier Simpson at Michigan seem to have had their careers ended, without one last chance at a national championship.

"It is complicated, right?" Michigan AD Warde Manuel said Friday on WTKA. "You have basketball teams that have played 90-95 percent of their season or more. Do those seniors get an extra year?"

A whole lot needs to be worked out on this front, of course, for starters the financial-aid ramifications.

Also, allowing seniors an extra year of eligibility would create a backlog, with incoming freshmen classes. That ripple effect could cause years worth of issues. Basketball and football teams could have to redshirt entire classes.

"The committee recognizes that several issues need to be addressed related to providing an additional season of competition," the NCAA Board of Governors said in its Friday memo, which was obtained by The Detroit News. "The committee recognizes that student-athletes are making life decisions that will be helped by understanding whether an additional season of competition would be available, and as such, will work in a timely manner to make informed decisions.

"Finally, the committee will review and discuss the additional issues in a timely manner and decisions will be communicated to the membership as they are made."

The NCAA also said in its memo that it has installed a recruiting dead period through April 15, and that the dead period would be re-evaluated in the coming weeks. The dead period denies all on- and off-campus visits, as well as all communication, even via text.

Additionally, the NCAA has advised its member schools, in all divisions, to "take action in the best interests of their student-athletes," including support, benefits and expenses, without having to seek NCAA approval.

Earlier Friday, Detroit Mercy senior golfer Scott Sparks, of Shelby Township, said he hoped "the NCAA would do the right thing" in regard to another year, but that he wasn't hopeful.

Then came the NCAA's good news.

"Oh my, that is awesome," said Sparks, whose career scoring average of 75.81 is among the best in school history. "I don't want to end my career on such a low note."