Hope was 29-0 and four wins from another national championship.

The season didn't ended how he wanted. In fact, it never really ended at all.

But Hope women's basketball coach Brian Morehouse received a bit of a consolation prize Thursday, being named the Division III national coach of the year by the Women's Basketball Coaches Association.

It's the second time he's won the award, joining 2006, when he led his team to a national championship. 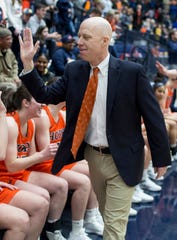 He felt like he might be on his way to another championship this year, with Hope 29-0, blowing out more opponents than not. But the plug was pulled because of the coronavirus, Hope left to wonder what-if.

"We had a tremendously challenging road ahead of us, and yet I think this team was very capable of doing it," Morehouse said. "Bottom line, our team understands what they accomplished.

"I don't think that's gonna take away from the special, unique aspects of this year's squad."

Morehouse will be presented with the Pat Summitt Trophy, though who knows when. The award winner was picked by a committee of coaches.

Hope was the only undefeated team left in Division III, and one of 16 teams left in the NCAA Tournament when all winter and spring championships were cancelled because of the global virus outbreak.

Hope, based in Holland, Mich., finished ranked No. 1 by the WBCA and D3Hoops.

Morehouse took over as head coach in 1996, and has a 609-90 record, including 15 MIAA championships, 19 NCAA Tournament appearances and the national championship. In January, he earned his 600th win, becoming the fastest to reach that plateau (690 games) in NCAA history at any level, men's or women's.