New WMU coach Clayton Bates didn't see this coming, but 'I don't make any apologies, either'

Bates, a longtime Western assistant, has a two-year deal that will pay him $220,000 a year.

New WMU coach Clayton Bates didn't see this coming, but 'I don't make any apologies, either'

Once before, then a second time, Clayton Bates left the Western Michigan basketball program.

Earlier this month, he thought he was saying his goodbyes yet again — an assistant coach who found himself collateral damage following the dismissal of longtime head coach Steve Hawkins.

But late Saturday night, Bates found himself saying his hellos again, as Hawkins' surprising successor, in a video conference call with his players, assistants and university administrators. 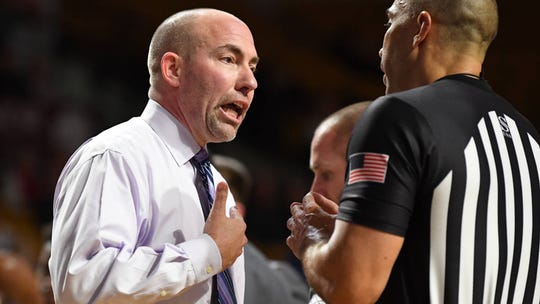 He was one of 20 frames on the computer screen.

"It was almost like 'The Brady Bunch,'" Bates said, laughing. "We should've put our nickels into Zoom."

Bates, 47, has spent 15 seasons as an assistant under Hawkins, through three different stints. And it was expected when Hawkins was let go after 17 seasons, his staff was following him out the door. The plan was for athletic director Kathy Beauregard to conduct a national search, one that started — and she had hoped ended, too — with former Broncos star and current Michigan assistant Saddi Washington.

Washington, though, decided to stay at Michigan, and Western had to regroup — in an environment where it was increasingly difficult to do so, with folks sheltered in place all across the nation. There were even rumblings about Hawkins perhaps returning for one more season.

But, last Tuesday, after talking with other interested parties (including MSU assistant Dwayne Stephens and ex-Indiana assistant Ed Schilling), Beauregard reached out to Bates. Five days later, he had a contract, and his first head-coaching job.

Beauregard, in a late-night statement Saturday, acknowledged the coronavirus forced the scrapping of a national search, and that Bates, on a two-year deal, was best suited to keep the program stable.

"Certainly, we're in an unforeseen time," Bates said. "It has always been my strong desire to be a head coach. I didn't imagine when Mrs. Beauregard made the change that this is what the outcome would be.

"But I don't make any apologies for that, either."

Bates first came to Western Michigan in the early 2000s under previous coach Robert McCullum, then was retained when Hawkins got the top job in 2003.

Bates was on staff through 2008, took a year off, came back, then from 2010-12, he joined then-head coach Billy Donlon's staff at Wright State.

Bates thought he was making the best move to further his career. He quickly realized he was mistaken. Kalamazoo had become his home. His wife, Annemarie, is from the area, from Portage, and their two daughters, Annelyse, 16, and Sydney, 13, were born there.

So, after the Wright State stop, Bates rejoined Hawkins at Western.

"We love the area, we have family here. The community, it's not just that we have friends here, but we have really strong relationships," Bates said. "Really meaningful relationships.

"It wasn't until we moved to Ohio that we said to ourselves how much we miss Kalamazoo."

Bates played at Florida, even making a Final Four, under Lon Kruger, then later joined Kruger as a member of his staff at Illinois. He's been a part of two Western trips to the NCAA Tournament, the last in 2014.

Beauregard gave him a two-year contract that's worth $220,000 annually in base pay, $185,000 less than Hawkins was making. It's the lowest salary in the Mid-American Conference.

The cost savings is no small thing for Western, which currently is in a hiring freeze, and not allowed to hire from outside the university. Bates, essentially, was an internal promotion.

So, some could see this as a mere stop gap for Western. Bates has higher hopes than that, despite the struggles the past two years, 21-43 including 8-28 in the MAC.

"We can't look backward," Bates said. "We can't have any regrets."

Beauregard viewed the Bates hire as a safe one for the program, a well-respected staff member who could keep the pieces together — including the staff (Thomas Kelly and Jake Bullock are returning) and recruiting, which is a tricky proposition these days, given there's no in-person contact allowed. Coaches are having to get creative in keeping those relationships free.

Then there's the current roster. Between Hawkins' dismissal and Bates' hire, no Western players had entered the transfer portal. 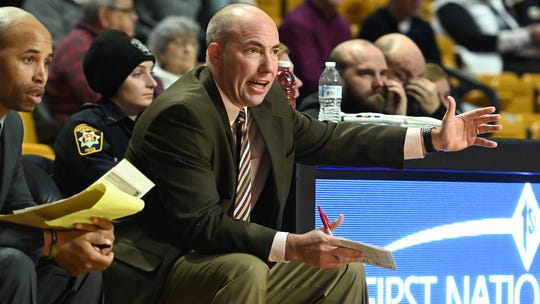 Since Bates was hired, two have — the team's two leading scorers from last year, Southfield A&T guard Michael Flowers (17.0 points per game) and Chicago forward Brandon Johnson (15.4). Each will have one season of eligibility remaining. On the transfers, Bates gave a very political answer, saying "we were surprised by some of it."

"What we can do as a program is wake up every day and embrace doing everything it takes to be as good as we can be," said Bates, who spoke with Hawkins before the announcement Saturday night, and sung the praises of Hawkins' friendship and mentorship. "Stay consistent through good times and bad.

"If we commit to doing that together, we'll be OK with the results no matter how things turn out."