It looks like that Detroit Mercy-Kentucky game is happening, just not at Calihan Hall

According to a report, the teams will play at Rupp Arena in 2020, marking a homecoming for Titans guard Brad Calipari.

It looks like that Detroit Mercy-Kentucky game is happening, just not at Calihan Hall

Now, it appears they will play, just not in Detroit. 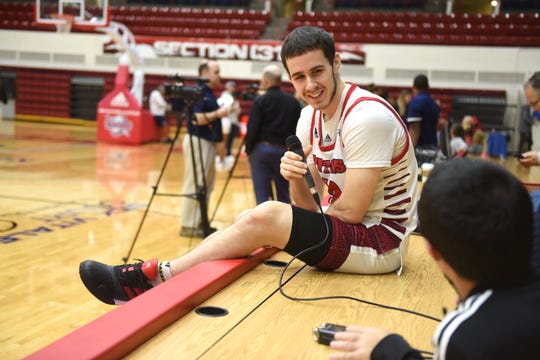 According to a report from The D1 Docket, which is consistently in the loop when it comes to nonconference college basketball scheduling, Detroit Mercy and Kentucky will play at Rupp Arena in Lexington in 2020, as part of a tournament. Richmond also will play Kentucky as part of the tournament, according to the report.

The Detroit Mercy-Kentucky game would mark a homecoming for Titans guard Brad Calipari, whose father is Kentucky coach John Calipari. Brad Calipari transferred from Kentucky to Detroit Mercy ahead of last season, when he averaged 6.1 points and 1.1 rebounds.

"That'd be cool to play against them," Brad Calipari said last season, when the prospect of the possible meeting first emerged.

Detroit Mercy couldn't confirm the game when reached by The Detroit News on Thursday. No game contracts are available from the school, which is private and thus not subject to state Freedom of Information Act laws.

Kentucky also will play Michigan next season, with the game in London scheduled for Dec. 6.

Kentucky will host Detroit Mercy in a non-conference game this season, game is part of campus site round-robin MTE, per public records obtained by @TheD1Docket.

Kentucky’s game against Richmond is part of same MTE. #BBN

Kentucky, at 25-6, finished eighth in the final Associated Press poll this past season, which was cut short before the NCAA Tournament could be played because of the COVID-19 pandemic.

Detroit Mercy was 8-23 in Mike Davis' second season as head coach. The Titans didn't compete in the Horizon League tournament because of an NCAA postseason ban regarding academic reports, which predated the tenure of Davis and any coach and player currently on the Titans' roster.

The Kentucky game would be the latest marquee addition to the Titans' schedule, which this past season included road games at N.C. State, Clemson, Notre Dame and Gonzaga. The year before, Davis' first, the Titans traveled to Butler, Cal and Xavier.