Eastern Michigan is the latest state school to announce pay cuts for some of its head coaches, in response to the financial fallout from the COVID-19 pandemic. 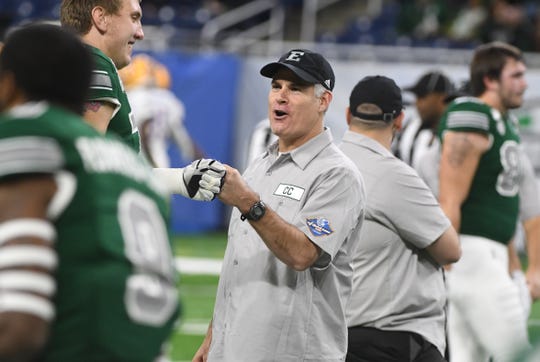 Athletic director Scott Wetherbee and president James Smith already had taken 7% pay cuts, along with other leadership positions at the school.

The pay cuts went into effect Saturday, and will run through at least July 31.

"I am proud to do my part and proud of our head coaches and staff members that have stepped up to help our department address these unprecedented circumstances," Wetherbee said in a statement. "It's the right thing for all of us to do.

"There are a lot of unknowns ahead of us still as we look forward to competition resuming. Our priority is the welfare and success of our student-athletes and these temporary and voluntary cuts help us align our fiscal reality with our departmental goals."

Previously, Western Michigan and Central Michigan announced pay cuts for many of their head coaches, as well as athletic-department leadership.

Earlier Tuesday, Central Michigan announced the elimination of its men's indoor and outdoor track and field teams, which will save the department $300,000 a year in the short-term and more than $600,000 a year in the long-term. It's the first school in the state to cut a sports team as a result of the coronavirus.

College athletic departments across the country are grappling with major budget issues, as the result of a pandemic that has shut down sports since early March. Division I colleges have lost out on six-figure pay days, because of the cancellation of the NCAA men's basketball tournament.

Things will only get substantially worse if football has to carry on without fans or this fall, or even worse, if the season is canceled altogether.

At Eastern, about 70 coaches and non-bargaining staff will receive some pay reduction and have work hours reduced by 40%. Many of the employees will be eligible for unemployment benefits, including the $600-per-week from the federal government's CARES Act.

Eastern also has instituted a spending freeze and paused all university-sponsored travel.